When some villains grow to a giant like size Ben knows that there is one alien that any villain can try on for size. Azmuth unlocked this new kind of alien when Ben was 10 years old and Ben gave it the name Way Big because of his gigantic size!

Species and Home planet: Way Big’s species is called a To’kustar and where he comes from is a Cosmic Storm cloud (where they are born in). See image below: 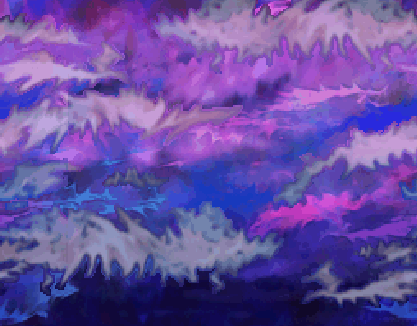 Original Series Description: Way Big can be described as a very tall gigantic humanoid creature with a large red and black shark-like fin on the head. He has two blade-like outgrowths on his shoulders and has some spikes sticking out of his waist. His arms are red with three black lines and white fins on the elbows. Way Big has some wristband-like outgrowths on his wrists and yellow eyes on his head with two extra yellow eyes protruding on his cheeks. His feet are red with two toes on each foot, a black sandal-like covering on the middle of his feet, and a line on the side of his neck. The Omnitrix symbol is located on his chest. See image below: 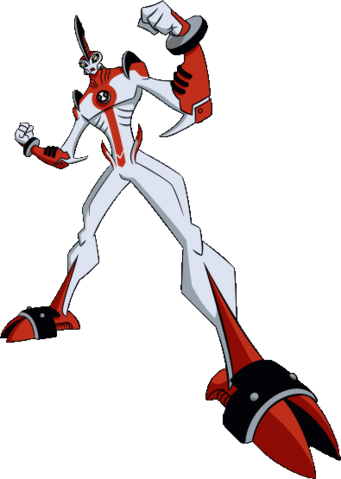 Alien Force and Ultimate Alien Description: In the Alien Force and Ultimate Alien series of Ben 10, Way Big’s appearance had changed since then like the fin, for example, is now red on the front and black on the bottom. His arms are now white with red fins coming out of them and his neck is colored black. Way Big’s wrists are also black and his feet now are red. Way Big doesn’t bear the extra eyes anymore and the eyes on his face are now colored green. He doesn’t even have the three black stripes on his arms anymore like he use to. Also the blades that use to be on his shoulders and waist are now gone. His feet have now changed from sandal-like coverings to boot-like feet instead. The Omnitrix/Ultimatrix symbol is located on his chest (as always). See image below: 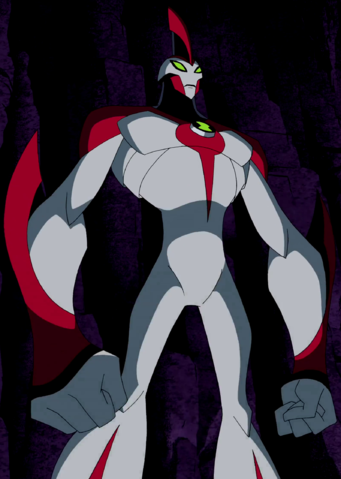 Omniverse Description: In Ben 10 Omniverse, when Way Big was used by both 11-year-old Ben and 16-year-old Ben, his appearance showed that the three red lines on his neck are a back color and he appeared to be more muscular than he was before. The blades on his shoulders did return as well. He has finger less gloves, which are shown to similar to the ones that Four Arms was wearing. The extra eyes are back on his cheeks again but they’re more metallic and the blades on his waist and front thighs are back too. Plus his head is less skull shaped than it was before as well. The New Omnitrix symbol is located on his chest (same as always) See image below:

Albedo has Way Big Description: When Way Big was used by Albedo in the Ben 10 Video Game Cosmic Destruction, his version did look similar to Ben’s from Alien Force and Ultimate Alien expect that the fin, for is now purple on the front and black on the bottom. His arms are now black with purple fins coming out of them, the neck is still colored black, the legs are black, the boot-like feet are black and purple, and the eyes are red. Also the device on the chest sort of looks like an Omnitrix symbol. See image below: 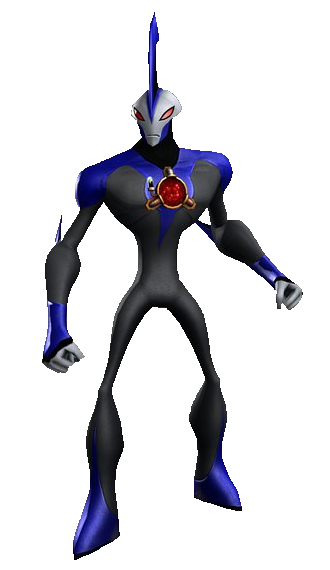 Destroy All Aliens Description: When 10-year-old Ben used Way Big in the movie Ben 10: Destroy All Aliens, his Way Big looked exactly the same as 15-16-year-old Ben’s Way Big from Alien Force and Ultimate Alien. Also the Omnitrix symbol on the chest was also the exact same color as it was on Alien Force and Ultimate Alien as well. See image below: 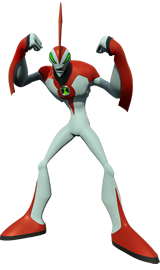 Mad Ben as Way Big Description: When Mad Ben used his version of Way Big, his did look nearly looked identical to Ben’s Way Big except that the eyes are an orange color instead of green and the parts are orange instead of red. Mad Ben’s Way Big wears grey shoulder pads with orange colored spikes, spiked shoes, orange colored wraps on his forearms, and the arm blades on his arms are serrated as well as the frill (or fin) on top of his head which is also serrated. See images below: 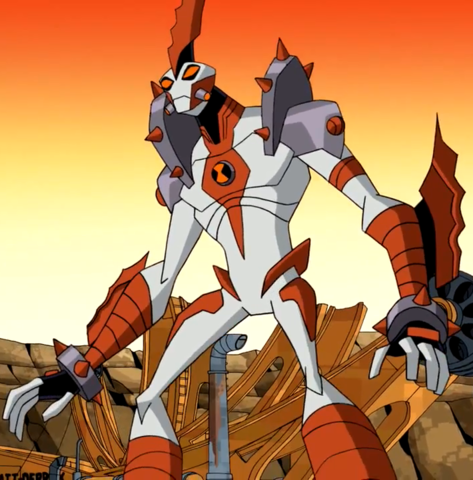 Special Abilities: With this kind of gigantic size Way Big is considered to be one of Ben’s strongest transformations. For example, in the movie Ben 10: Secret of the Omnitrix it was shown that Way Big defeated Vilgax (who was Way Big’s size at the time) and his army of robot drones with his first ability enhanced strength. Way Big also used that strength to threw Vilgax into orbit (after picking him off the ground). The second ability that makes Way Big Ben’s strongest alien is his durable skin because it’s strong enough to withstand any kind of attacks from enemies while barely even feeling them. The third ability that Way Big has is that he can fire a beam of energy that’s called a cosmic ray. This cosmic ray ability is very similar to the Ultraman signature technique Specium Ray. Way Big can demonstrate this ability by simply crossing his wrists together with his right forearm facing vertically up, his left forearm facing horizontally across, and making sure the thumb edge of his hands is facing directly in front of his body (making them look like a cross and a crucifix). After he does this ray then comes out from the outer edge of his right hand in a powerful pale blue color (or a green color in Omniverse) ray. Mad Ben’s Way Big performed the exact same attack except by crossing his arms in an X shaped pattern. Ben did also demonstrate that exact same attack as Way Big in episodes Showdown: Part 2 and The Frogs of War: Part 2. Way Big’s fourth ability shows that like XLR8 he has enhanced speed has well. The fifth ability of Way Big is being able to create cosmic storms but throughout the series he hasn’t really demonstrated that kind of ability though. The two final abilities that Way Big has shows that can survive a vacuum of space and even survive in very extreme temperatures. See images below: 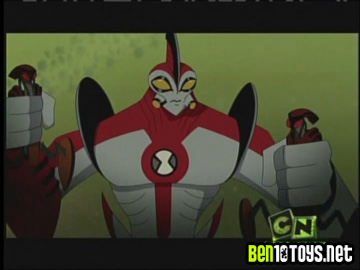 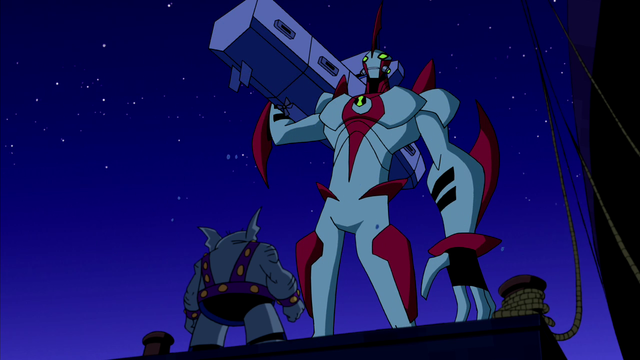 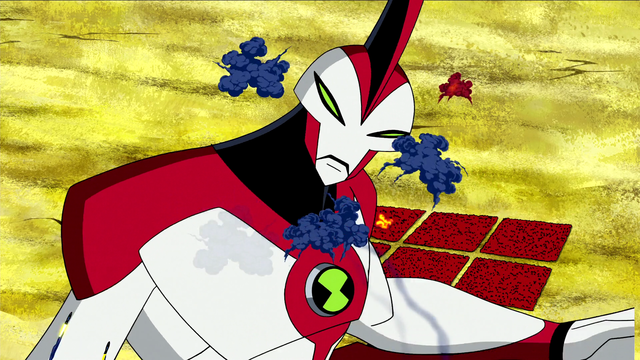 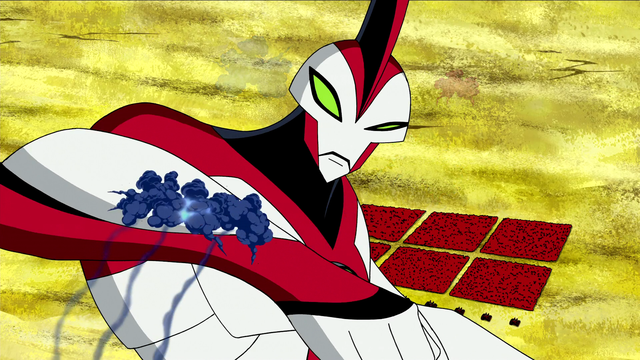 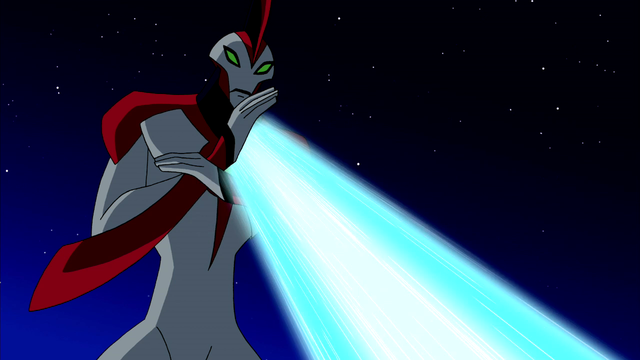 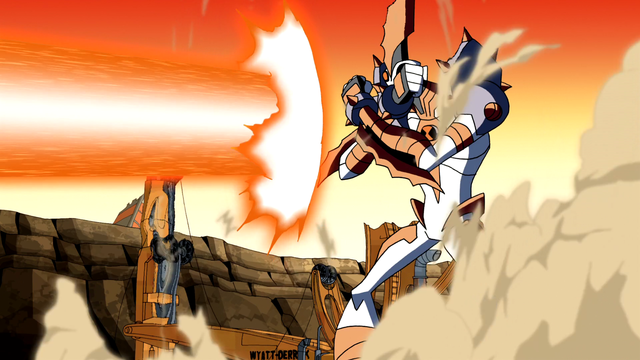 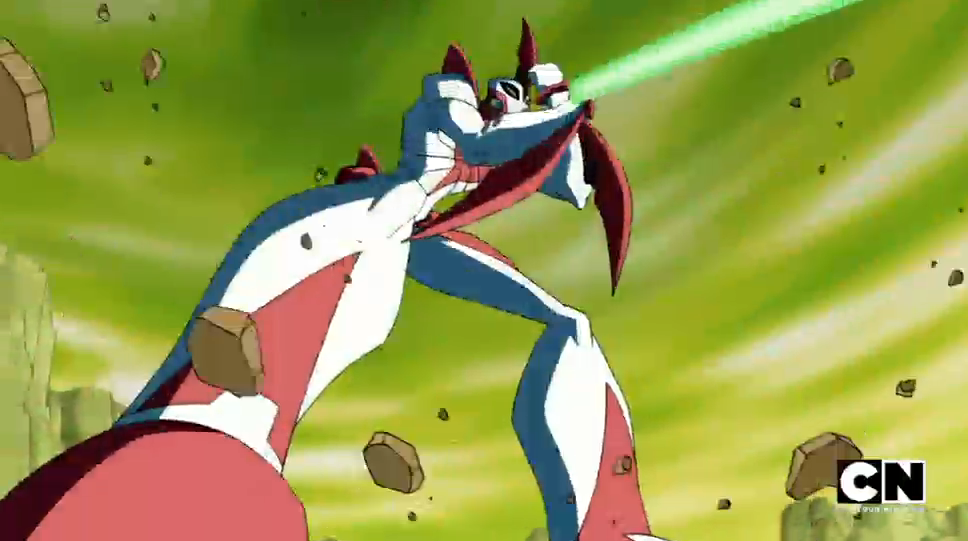 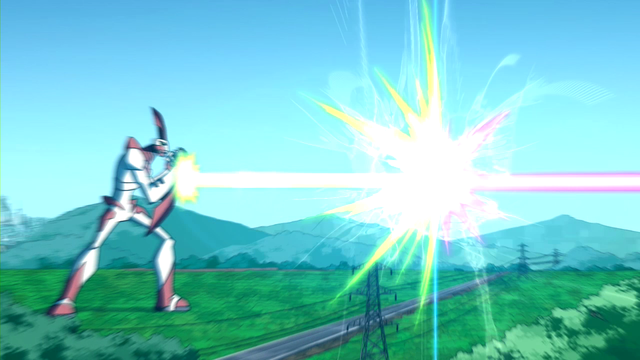 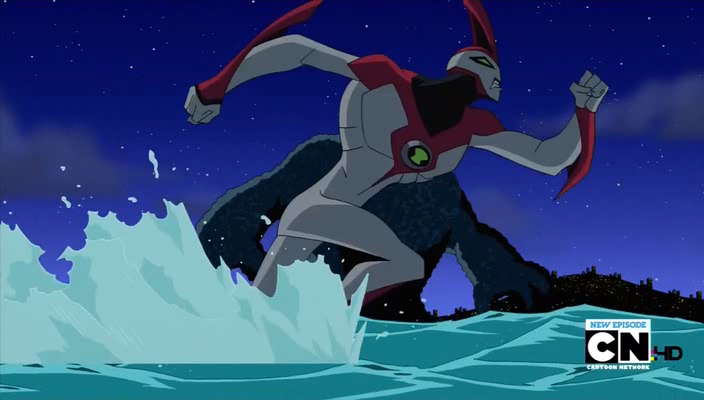 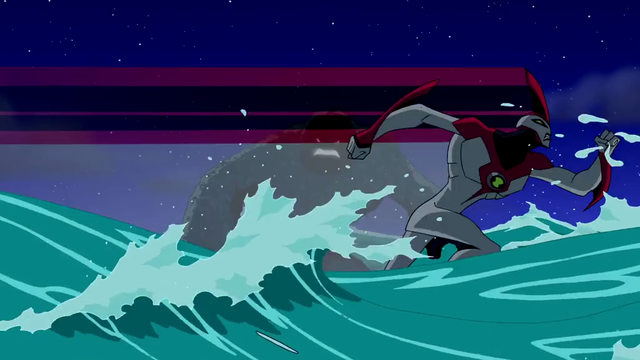 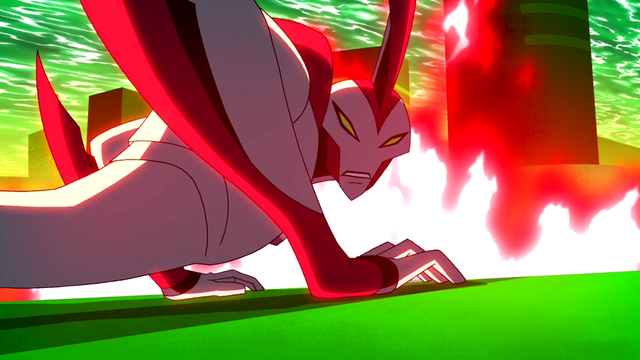 Weaknesses: The fist weakness that this alien has is that despite his very large size Way Big can sometimes forget about how strong he really is. This gives him a slight problem. If you want to know why it’s because when Ben turns into Way Big, he needs to make sure to avoid crushing buildings (plus giant statues) and such. The second weakness shows that Way Big’s size can even give his location away, meaning that he can easily be spotted. It’s revealed in the movie Ben 10: Destroy All Aliens that Way Big’s third weakness is the fin (or frill) that’s on top of his head. Why the fin (or frill) on top of Way Big’s head is a weakness is because if the fin gets hit with a lazar cannon or something else Way Big will become so paralyze that he can’t move his body at all. The fourth and final weakness of Way Big is that he’s susceptible to accelerated time rays (as meaning it can turn him to dust) as shown in the episode Ben 10,000 Returns. See images below: 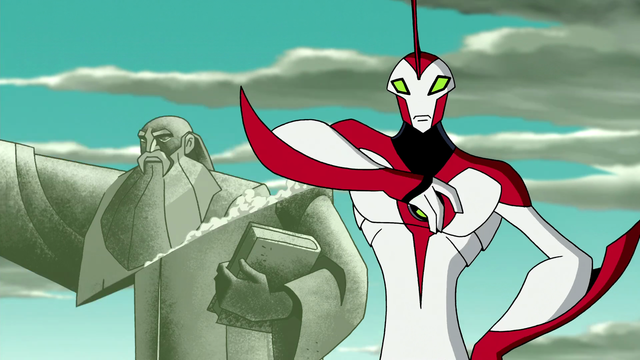 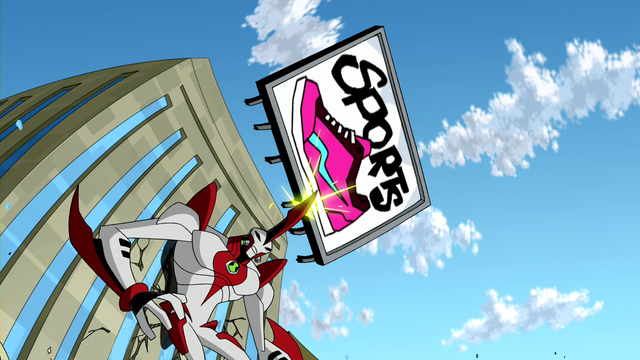 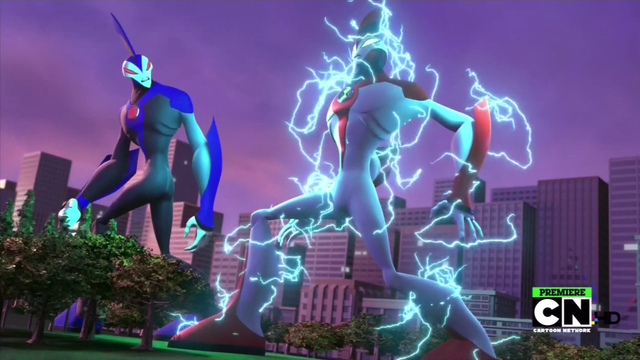 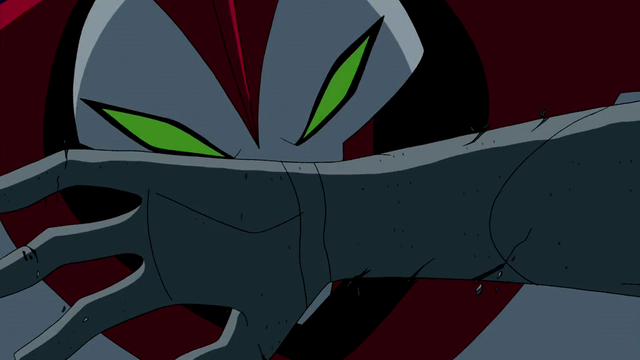 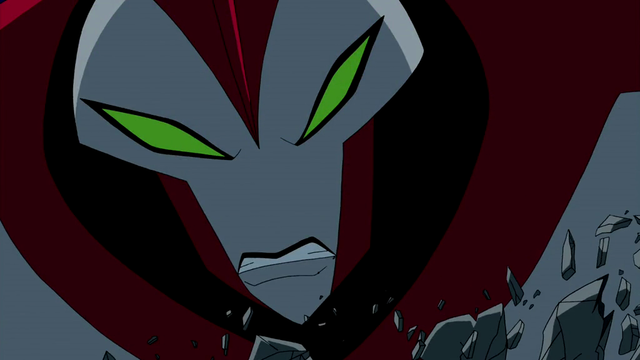 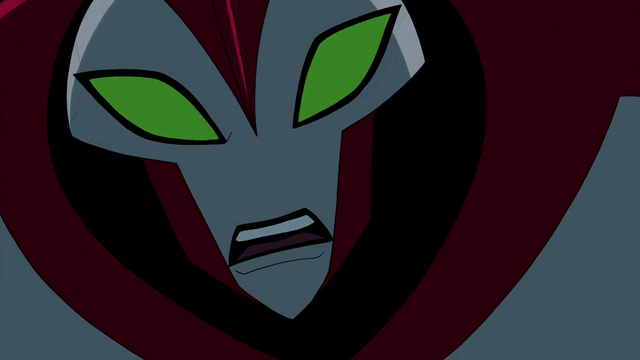 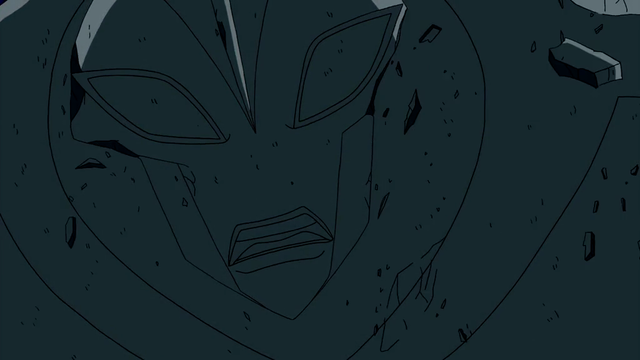 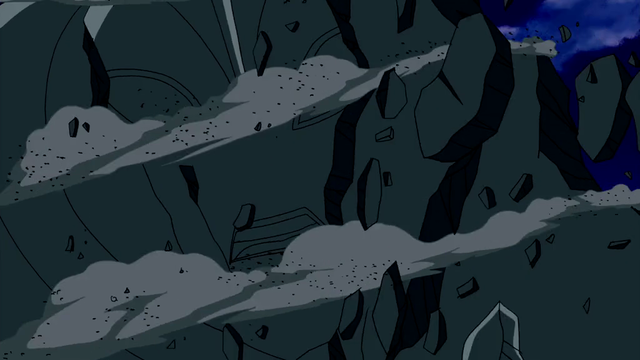 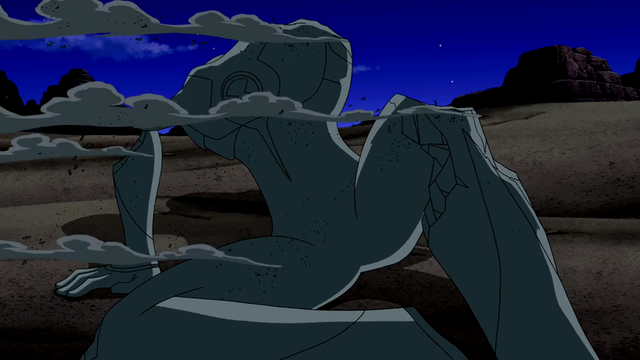