When Ben was facing against Phil when he was absorbing energy from the Megawatts in Undertown Phil somehow unlocked a new alien that Ben remembers using ever since he saw the alternate version of his future self use it when he was 10 years old. This new alien is like the other Megawatts and the name Ben gave him is Buzzshock! Buzzshock was my first favorite alien before Big Chill became my second favorite.

Original Series Description: Buzzshock can be described as a Humanoid battery with an appearance that’s similar to an earth dry cell. His body is a black color, with green colored electricity and green eyes. He has a white large lightning like line from where his neck starts, to where his legs start on his front and back. He has a hole on his head that can release electricity. He has a positive (+) symbol and negative (-) symbol on his back. Also the Omnitrix symbol is located in his chest. See image below: 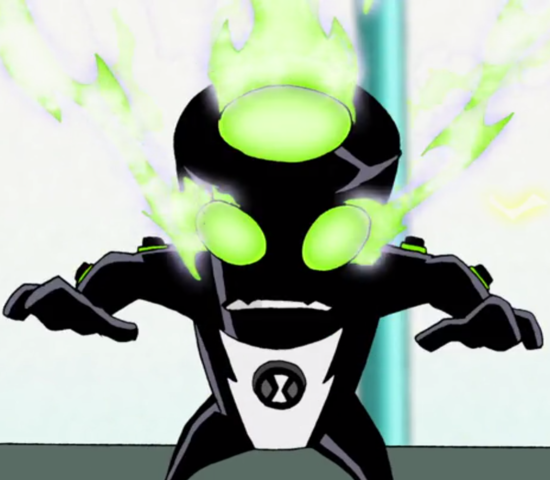 Ultimate Alien Description: When he appeared in the intro for Ben 10 Ultimate Alien, Buzzshock did look the same as he was in the original series except that he now has a grey spot on his head (that is shown to resemble a battery) instead of a hole on his head. Also the Ultimatrix symbol is located on his chest. See image below: 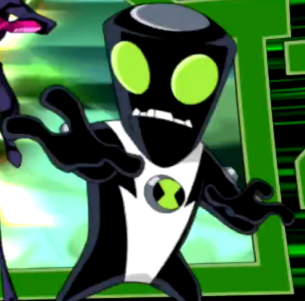 Omniverse Description: When used by 16-year-old Ben in Omniverse, it’s shown that Buzzshock’s shape has now completely changed (which is due to the new animation style the creators of Ben 10 where using when they started making the new series of Ben 10). He now has two bolts on each of his arms, the lightning bolt line on his is now colored green, the top of his head now appears to be shaped just like a battery, with the top colored light green, and along with a positive (+) symbol and a negative (-) symbol on his back similar to the symbols on a regular battery. His head appears to be now more prominent than before, as so is his chin, which actually sticks out rather than being part of a long, one-piece body. When he talks he apparently speaks with an extremely high-pitched voice, which is very similar to someone who speaks very high-pitched after inhaling helium. Plus his eyes are now almond-shaped instead of a circular shape. Also the New Omnitrix symbol isn’t located on Buzzshocks chest anymore its now located on the top of his head. See image below: 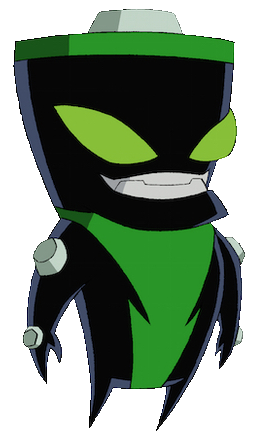 Bad Ben as Buzzshock Description: When Bad Ben (one of the evil Bens the Vilgax and Eon recruited) was using Buzzshock; his Buzzshock did look exactly the same, as Ben’s except the color is a minty green color instead of the regular green color. See image below: 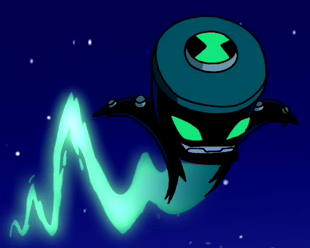 Special Abilities: The first ability of Buzzshock is having the capability to pass through any electrical source with amazing speed the same way as Ra’ad and AmpFibian and being able to have the ability to manipulate green electricity. Buzzshock second ability is shown that he can do more than manipulate electricity and zapping it at enemies, he can even control it and even inhabit electrical devices by either controlling them from the inside or in some cases juicing up the power in them, however, he can also cause electrical technology to malfunction and fry when he passes through them. Buzzshock even shows that he can animate and possess electrical machines as a result. Buzzshock third ability is that he can duplicate himself if he’s either cut in half by a sharp weapon or by adsorbing enough electrical power. This also shows that his duplicating ability can even enhance his fourth ability, which is durability. That ability allows him to be uninjured if he is severed in half, as he simply can duplicate to avoid being harmed. Buzzshock’s fifth ability is shown that he has the capability to fly, but unlike other Nosedeenian’s (or Megawatts if you prefer to call them), Buzzshock’s speech is understandable meaning that he is the only Nosedeenian that speaks English while the rest of his species doesn’t. Buzzshock’s sixth ability shows that he does appear to have enhanced agility, as shown in the episode Max’s Monster when he jumped over Phil after he attacked him and then landing perfectly on both of his feet. His final two abilities show that he also appears to have enhanced speed and electrokinesis. See images below: 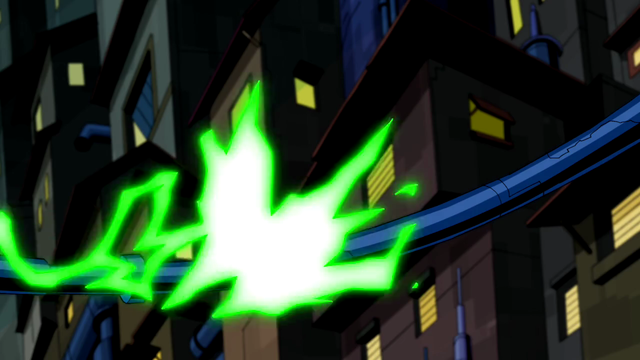 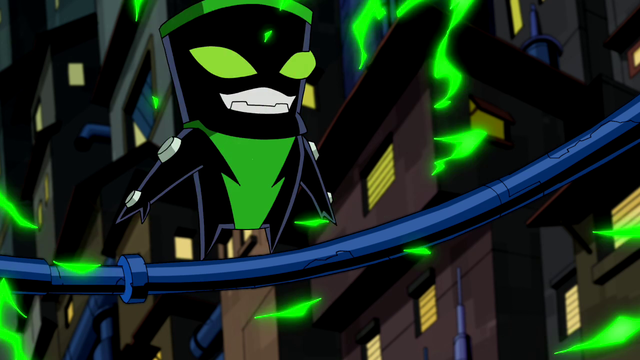 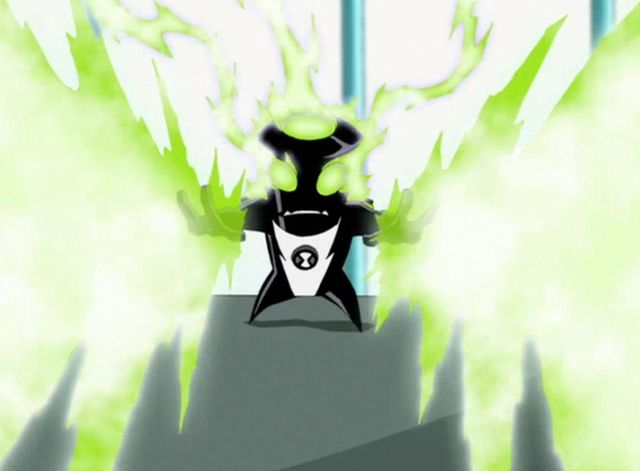 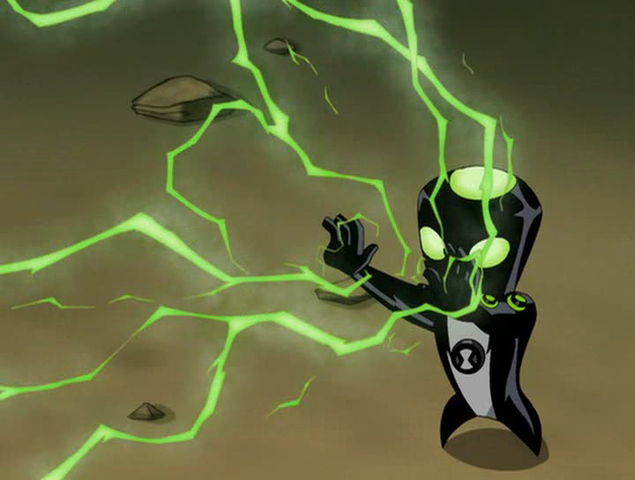 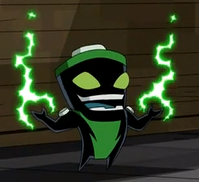 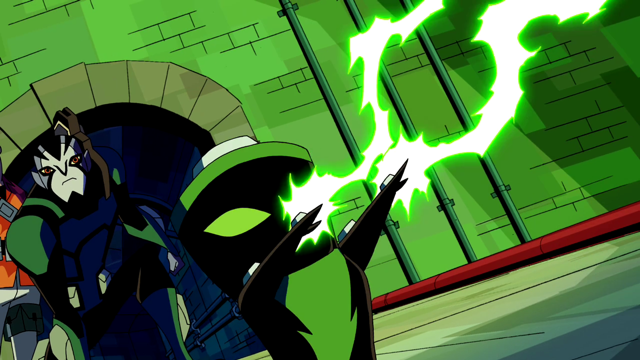 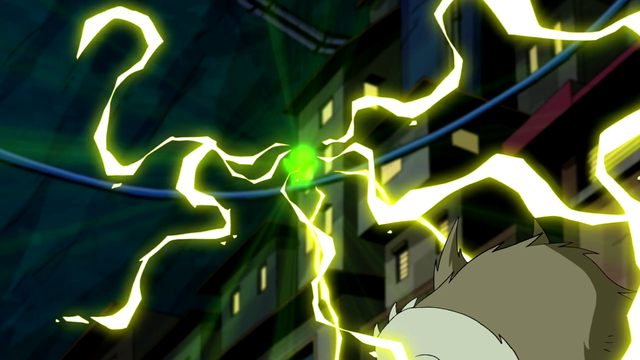 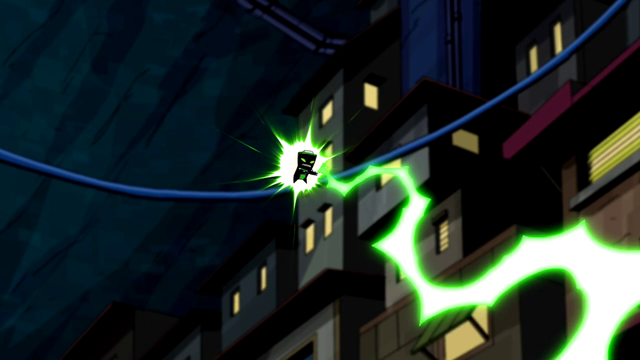 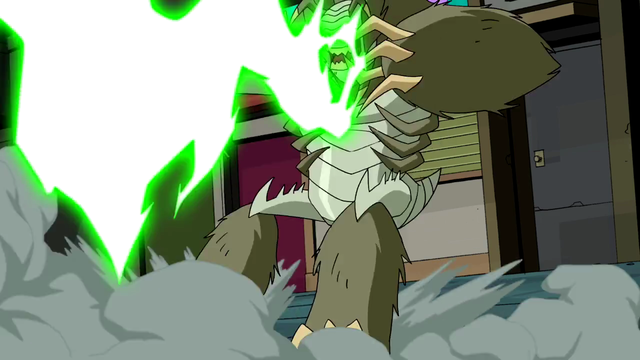 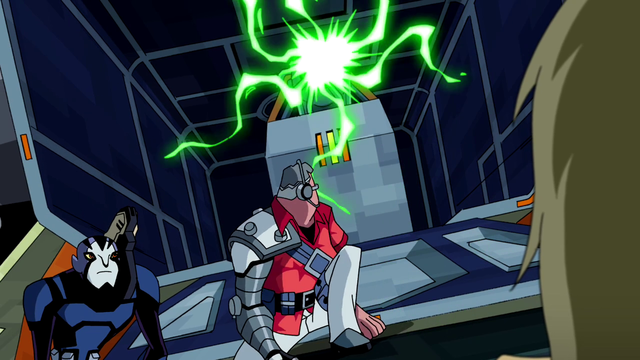 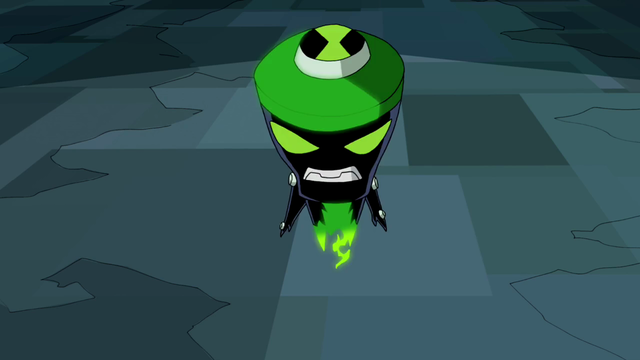 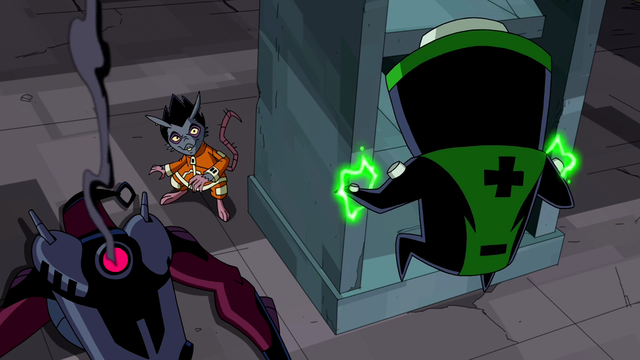 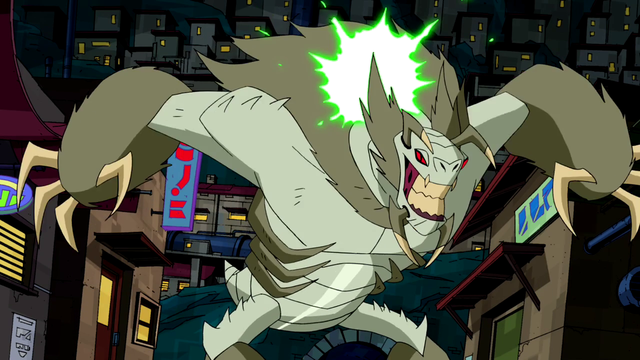 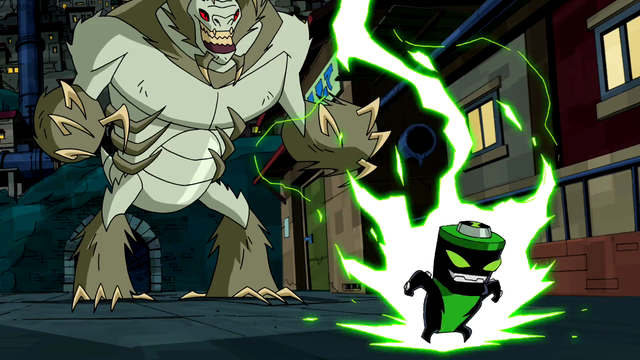 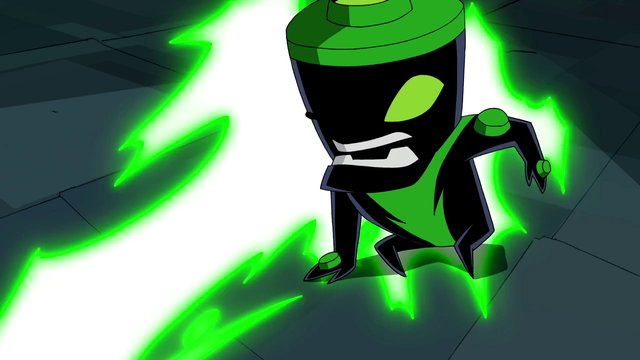 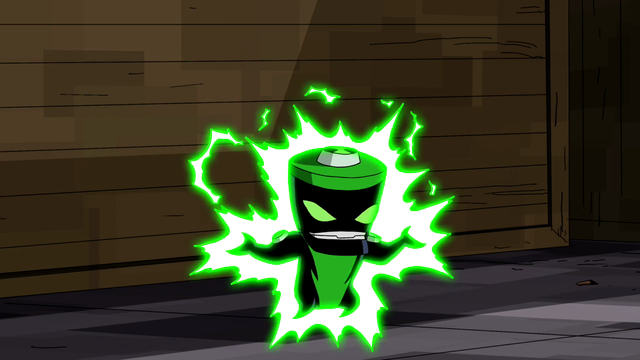 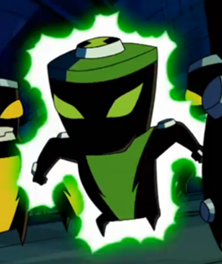 Weaknesses: One of Buzzshock’s weakness is fire because for some reason it seems that fire can take away his ability to use his electric powers, as well as getting trapped in something that appears to be made of a non-conductive material. As seen in the episode A Jolt From The Past, if Nosedeenians (which are Buzzshock’s species) run out of energy, then they will fall straight to sleep and as shown in the exact same episode, Nosedeenians can be also be insulated with rubber-sheeted blankets (which is good because rubber doesn’t conduct electricity). Though Buzzshock is durable he doesn’t appear to be not that very durable, as shown in the episodes Cough It Up and The Color Of The Monkey, when he was easily taken out by Sevenseven’s laser gun with just one shot (which was only enough to keep him from being harmed, but not enough to keep it from incapacitating him) and when he crashed into an electric display sign and got shocked by a lot of electricity he couldn’t absorb. See images below: 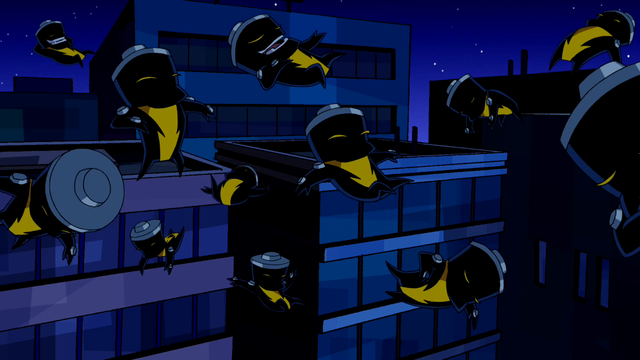 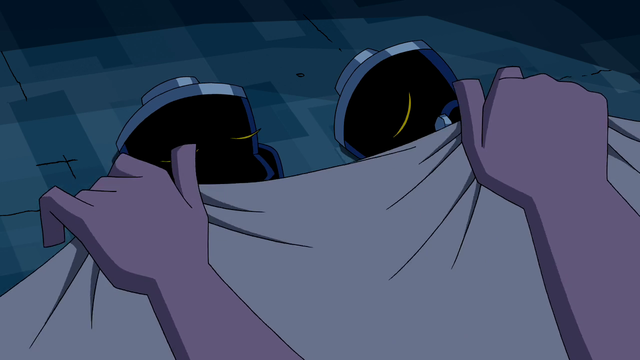 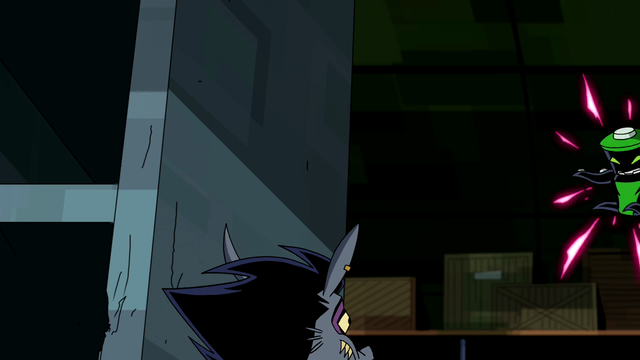 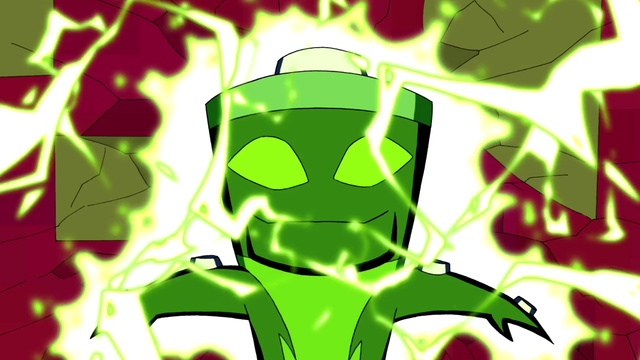