When Ben was battling a villain named Dr. Vicktor who is Frankenstein monster alien, when Vicktor grabbed Ben by the arm where the Omnitrix was the device activated absorbing Vicktor’s DNA in the process giving Ben a new alien that was a good one to use to battle Ghostfreak of should I say Zs’Skayr when he used Krodium plunged Earth into total darkness so that he could be at full power all the time. This new alien is called Frankenstrike.

Species and Home planet: Frankenstrike’s species is called a Transylian and where he comes from is the planet (that I mentioned before) called Anur Transyl. See image of planet below: 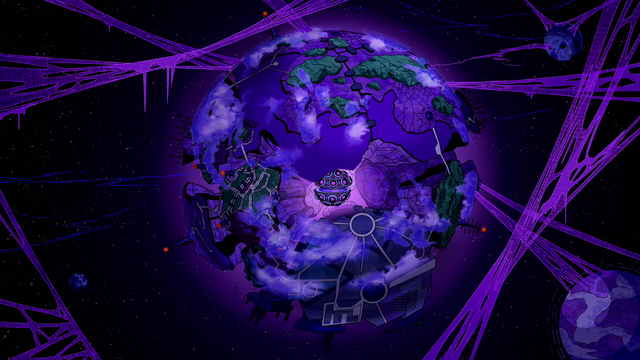 Original Series Description: Frankenstrike can be described as a Frankenstein monster humanoid. His appearance is shown to have a similar relation to the classic depiction of Boris Karloff’s version of Victor Frankenstein’s monster. He has a muscular body and a nose of a human. His skin is a greenish-grey color; he has a black mullet hairstyle with brown at the end, and sideburns. He has 2 tower-like conductor coils on his back that help conduct electricity. Frankenstrike wears black colored pants with lines on them and a triangle dash of some kind in the middle that glows green. He has stitched-like lines on his arms (right arm: half of his shoulder and left arm: halfway from his glove). He wears brown finger less gloves, 3 black and green bolts on his chest with 1 black bolt on each side of his neck, and all of the bolts have a green line on each of them. The Omnitrix symbol is located as a belt buckle on the white lines around his waist. See image below: 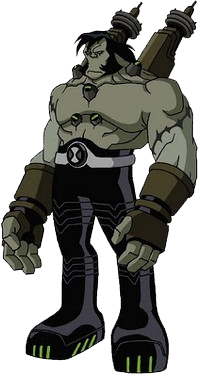 Ultimate Alien Description: When Frankenstrike appeared in the intro for Ben 10 Ultimate Alien, his skin was now completely grey and the fingerless gloves are now grey and so are the tower-like wire coils on his back. His belt is now grey with a grey hexagon is where the Omnitrix symbol used to be and the bolts on his body are now grey and have no green lines on each of them. Also the Ultimatrix symbol is located on the chest replacing where the top bolt in the triangular shape made by the placed bolts on his chest use to be. See image below: 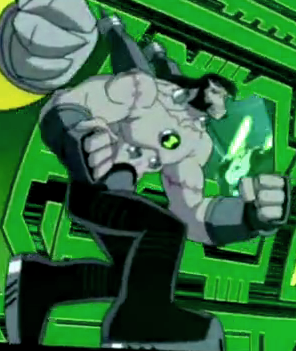 Omniverse Description: In Omniverse when he was used by 16-year-old Ben Frankenstrike’s appearance has now completely changed like for example his haircut is now shorter than you would remember, he lacks bangs and a mullet, but he still has the evident sideburns. His skin has some several uneven seams, which combine his grey-brown skin with some darker grey skin color. He also has very large pink colored scars across his chest and right arm. Some of the bolts are still there his neck, but the rest are not on his chest. Since the bolts are not on his chest anymore, they’re instead located on his shoulder, elbow, and his back. The bolts are now a bronze color that resemble a flathead screw with a green light in the crease. His belt is now green with white stripes, which have white bolts in them and another bolt as a belt buckle. The turrets on his back are now green with screws on them; the coils are now a white color and feature green bulbs at the tips. His gauntlets on his hands are now a green color with bolts on their knuckles, his legs are now a greenish-black color, and his “boots” are now copper with three green slits on them. Frankenstrike’s teeth are now a yellowish color and are uneven. His teeth bear out when ever he’s speaking. He does have the Omnitrix symbol located on his right pectoral embedded in the flesh with several deep scars protruding from where it resides. See image below: 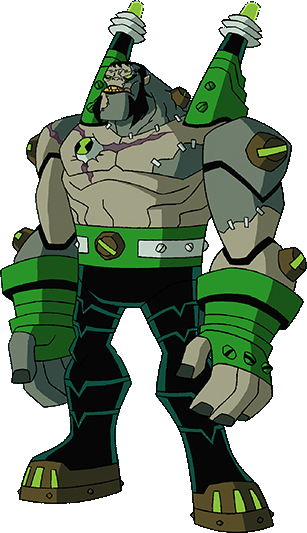 Ben 23’s Frankenstrike (or Lightning Volt) Description: When Ben 23 used his version of Frankenstrike which he calls Lightning Volt, his looked very similar to the Frankenstrike from the Original Series except, his skin is one-toned rather than two-toned and he has gold transformers on his back with light blue coils and bright blue bulbs. The gauntlets on his hands are gold, the set of stripes on his pants (specifically, his thighs and calves) are gold, and the rest of them are black with a blue highlights. The boots are gold with three bright blue lines. He does have bolts on his elbows, shoulders, neck, and chest. He has long black hair and sideburns and has a scar on his left upper arm, right shoulder, and above his left eye. The Dimension 23 Omnitrix symbol is located on the light blue stripe of his belt. See image below: 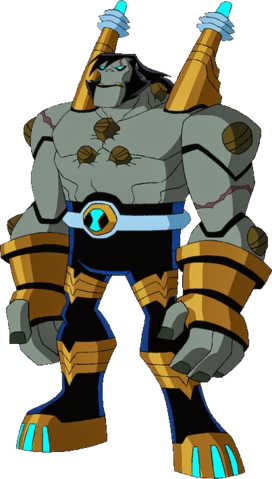 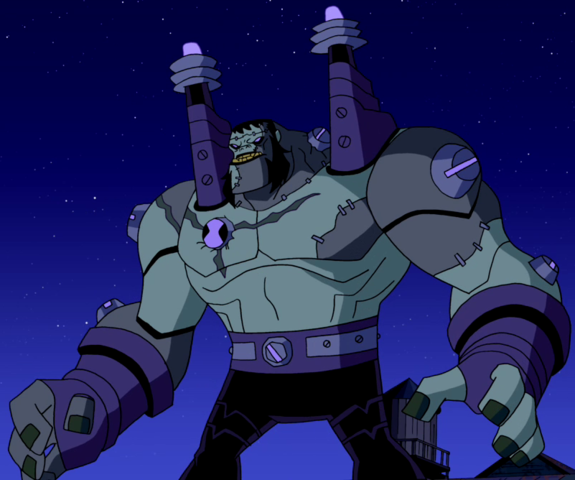 Special Abilities: The first ability of Frankenstrike is his electromagnetic body. This ability allows him to emit powerful lightning bolts and emit magnetism from his hands or his feet, allowing him to attach to any metal structures like a space station for example. His second ability comes from the two conductor coils that are sticking up from his back. With these has two conductor coils on his back they help allow Frankenstrike use an ability to generate and manipulate green lightning and electromagnetism. Frankenstrike third and fourth abilities that he possesses are enhanced strength (being able to life heavy objects) and durability. Just like Snare-oh, Upgrade, Gravattack, and Ghostfreak his fifth ability shows he can survive in a vacuum of space from which I think that Frankenstrike is very lucky to have this kind of ability. His sixth ability shows that he can even resist extreme heat. His seventh ability that he has is enhanced jumping. Frankenstrike’s final ability is called techno kinesis, which means that he has the power to connect himself to any kind of mechanical device or conductor coils and then control them. See images below: 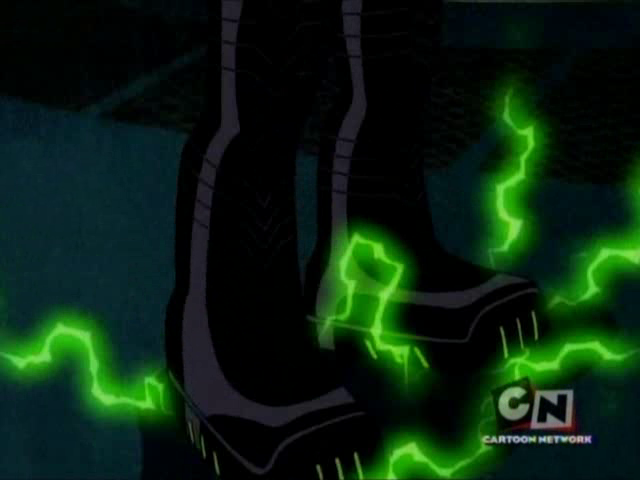 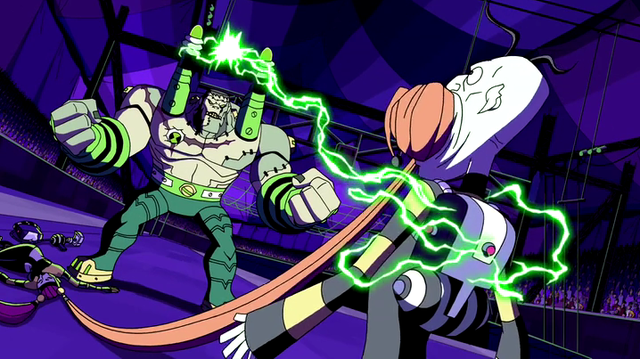 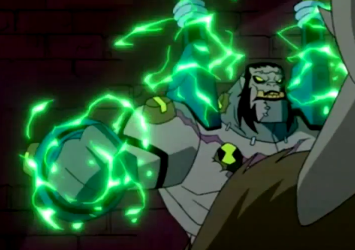 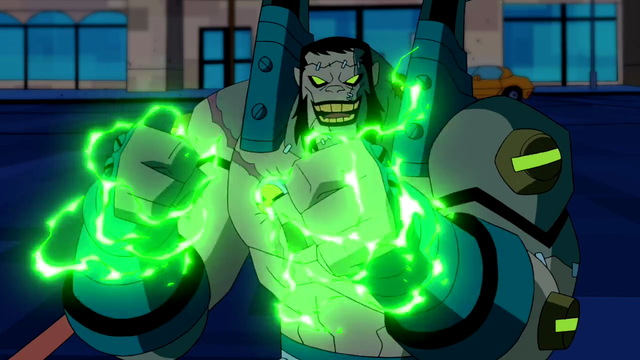 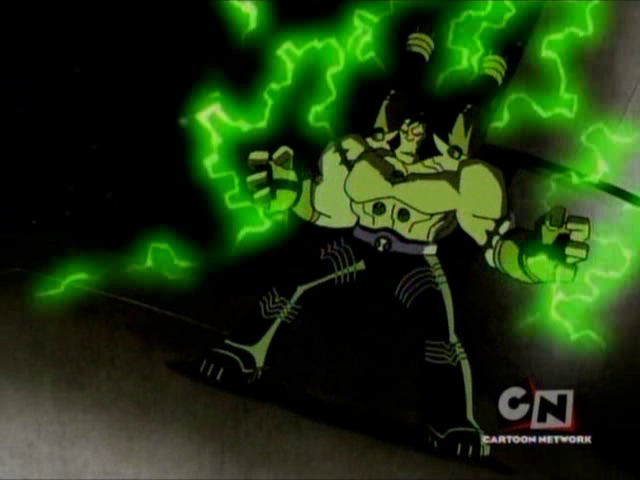 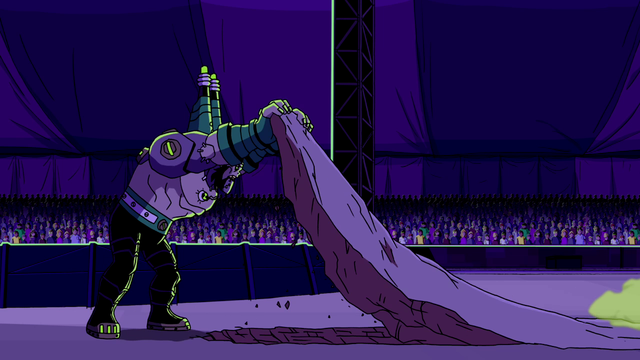 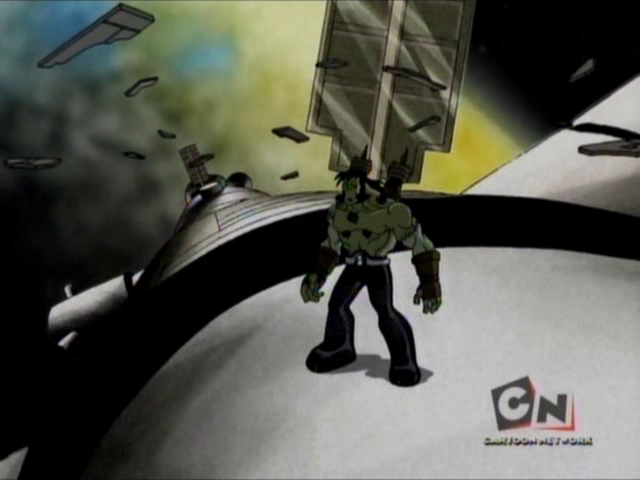 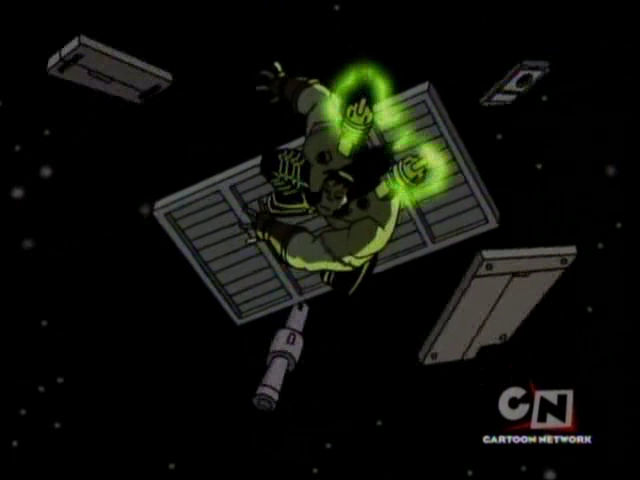 Weaknesses: The first weakness that Frankenstrike has is the two generators that stick up from his shoulders (that I mentioned before). Why do you ask well it’s because since those two generators are the source of his electricity power, that means if he doesn’t watch himself his opponents will have a chance to absorb his electricity through them like the way Max’s old plumber partner Phil did while he was still in his mutated Terroranchula form. His second weakness shows that despite his size he can’t fit into small spaces. See images below: 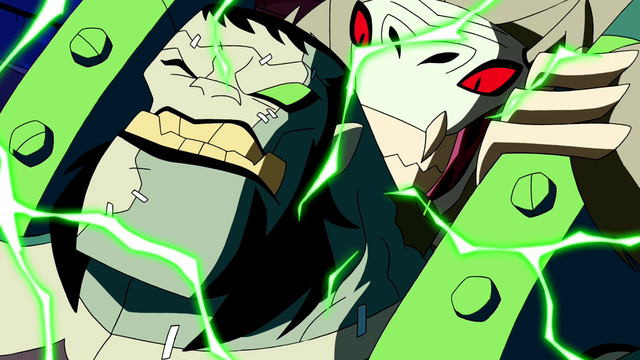 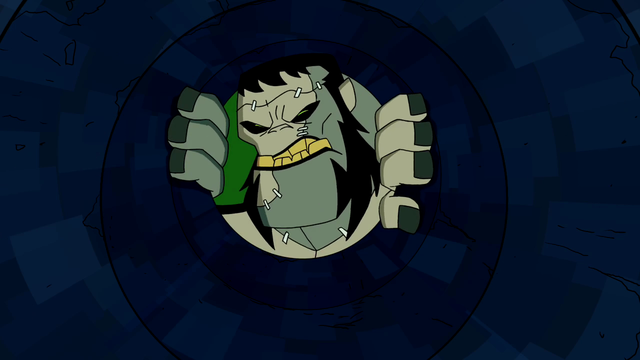 First Appearance: Be Afraid of the Dark