During the summer when Ben was 10 years old he did start having a first love interest in a girl who is the granddaughter of Max Tennyson’s old friend Wes Green (who FYI is also a plumber as well although he’s retired).

Even though Ben’s relationship with Wes’s granddaughter was going a bit well until she broke his heart when she revealed that she would like to train Ben and tame him as common house pet since she saw him change into the alien werewolf known as Benwolf.

But when she appeared again 6 years later she and Ben’s relationship when down the right and in the future they get married. This girl that you are about to learn about is named Kai Green!

Description: When Kai first appeared in the original series of Ben 10, she had long, black hair and brown eyes. She wore a red shirt, green shorts, brown boots with white socks, and wore silver bracelets with a blue ring. When she appeared a second time in Omniverse 6 years later, Kai has grown noticeably taller. She is slender yet athletic in built. She wears a long sleeved red shirt with a red and peach colored sweater. She still has brown boots (now with blue stripes) and her shorts are even shorter now. Her hair is in a high ponytail and she also has a tan earring. She wears brown gloves, tan socks, and a belt.

Kai’s History: She first appeared doing a spiritual Native American dance in the episode Benwolf. She was Ben’s first crush, but she only took interest in him after he started becoming Blitzwolfer (or Benwolf which I think is a better name) because she wanted to, which as quoted, “train and tame him” like a common dog. When she admitted to this, gave her a stern talking to that Ben was a person not a pet and that she shouldn’t talk to Ben like that When Kai appeared a second time 6 years later in episode An American Benwolf in London, when she called him and Rook when her grandfather was kidnapped by the Forever Knights. They she called was because while she was working with her grandfather, they found the secret laboratory that belonged to the deceased Dr. Jekyll (if you remember the story of Dr. Jekyll and Mr. Hyde), they were quickly ambushed by the Forever Knights who were also searching for Dr. Jekyll’s Mr. Hyde Formula. While capturing Wes, Kai managed to escape and contacted Ben and his partner for help. Ultimately, they discovered the hidden location of the legendary Excalibur. When removing the blade from its stone seemingly proves impossible even with the Hyde Formula or Ben’s strongest aliens, Forever King Chadwick orders his men to destroy their enemies. As Ben battles the mutated Forever King, the caves underground pipes were ruptured and caused a flooding. Convincing the Forever Knights to work together, everyone was able to escape alive. Fight at the Museum Kai comes to Bellwood to host a new exhibit on alien artifacts at the Bellwood Historical Museum. Her decision to invite Ben paid off when an alien thief named Subdora (who works for Maltruant tries to steal one of the artifacts, one of the first that Kai found with her grandfather. Fortunately Ben’s, Rook’s, Ester’s and Spanner’s efforts foil Subdora’s efforts. Knowing that Subdora will be back the four team up and stay overnight with Kai, Spanner being forced to reveal that he comes from a future where Kai and Ben have been married for years. Thanks to Spanner’s efforts Kai and Ben are locked in a room together where the two, despite their best efforts, bond. Later after Subdora’s partner comes in and tears through the museum and takes the “Key to time itself” from the artifact. Spanner takes the artifact itself leading to Kai to believe she has lost one of the most important things in her life. In the episode Secret of Dos Santos, Kai called Ben to South America so that he can help her track down The Temple of the Sky, an ancient temple that appeared to have distinct alien origins. During the time they where searching for the temple Kai soon developed a love-hate relationship with Ben with his antics, particularly his nickname “the future Mrs. Tennyson,” simultaneously annoying and helping her locate and get into the temple. Arriving at the temple’s treasure Temple Kai encounters a Galvan named Ujin. Professor Paradox comes in and explains that the artifact and the group has found is the final component of a villain named Maltruant, the mutant rogue Chronosapien, who appears to be hell-bent on taking over all of time and space. Exo-Skull tears into the room and with Subdora and Maltruant’s help escape. Ben leaves Kai on a good note. In the episode The Most Dangerous Game Show, Kai appeared as one of the several contestants chosen to compete in “The Most Delicious Game” for the chance to marry Ben and become the new Mrs. Tennyson. She is the ultimate winner, and joins Ben on a mission to free the losers from the, who have been trapped in the Null Void which as it turns out to be the losers box. After Charles Zenith was defeated by Ben’s alien Peskey Dust (which Kai quoted “That alien is so cute”), Ben slips on a banana peel and falls towards Kai, and the two accidentally kiss.

Kai’s special skills in the field: One of Kai’s special skills are having great tracking skills that were taught to her by her Grandfather (and retired plumber) Wes Green. Kai’s other skill that she uses in the field is hand to hand combat because in Omniverse she revealed that she has been taking Judo lessons, and showing this considerable skill against two highly trained soldiers of the Forever Knights.

Here are some photos of Ben’s wife over the years: 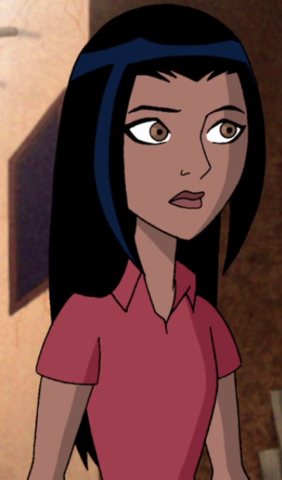 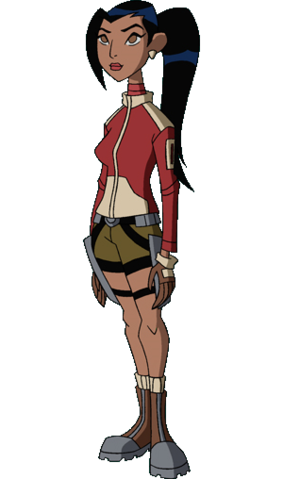 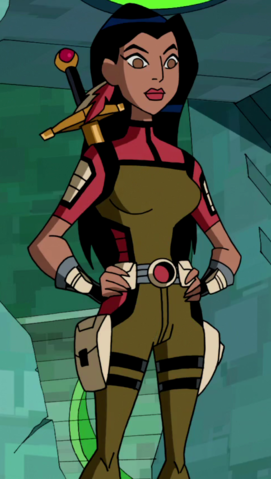