When Ben was battling one of Dr. Animo’s mutants in the episode Divide We Stand, he unlock a brand new alien hero that was very reliable at getting things done twice in one day. This new alien he unlocked is called Ditto! FYI everybody we all know that the word ditto means same here.

Species and Home planet: Ditto species is called a Splixson and where he comes from is a planet that’s called Hathor. No Image of this planet.

Original Series Description: Ditto can be described as a cat-like Humanoid that is about the height of an average human child. He has white skin, a black and white head, white face, and black shoulders. The hands are as you can see are large with 4 digits and feet are shown to be merely stubs. He has 3 fin-like growths, one sticking out on top of his head and two on each side of his face. On his arms and waist are small green gem-like orbs and 3 button-like gems. Ditto’s clothes are a black color and have an overall-like design that is almost similar to regular overalls. Also the Omnitrix symbol is located on his head. See image below:

Ultimate Alien Description: When Ditto appeared in the intro for Ben 10 Ultimate Alien, he did look the same as he was in the original series except that the white section outlining the hourglass symbol across his chest and on his arms is now a blue color. Also the Ultimatrix symbol is located on his chest instead of his head. See image below: 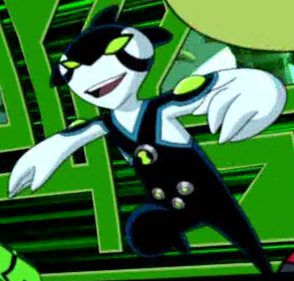 Omniverse Description: When Ditto was used by 11-year-old Ben in Omniverse, as you know in the original series, the fins on the side head a where black, but now in Omniverse they are white. He also has two small whiskers on each of his cheeks, which was odd because in the original series he didn’t have any. His fingers are now sharper and the green orbs on his shoulders are gone. He has gems like the three on his waist on his shoulders and wrists. His neck is completely black. He also seems smaller and stubbier. The feet of his suit were cut off to reveal 3 cat-like looking toes on each foot. Also the Omnitrix symbol is located on his forehead. When 16-year-old Ben in Omniverse used Ditto, he did look just like 11-year-old Ben’s Ditto but instead his fins are now a green color rather than a white color. Ditto’s jumpsuit has also changed from white with black to green with black patches under his arms, long green sleeves, and black sandaled-like ankles. The appearance of this new jumpsuit that Ditto wears is based on the design of the Omnitrix symbol. Plus the three gems on Ditto’s waist are now on a big black belt. The New Omnirix symbol is located on his forehead. See images below: 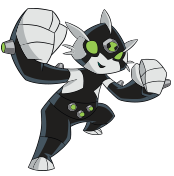 Special Abilities: Ditto’s first ability is self-duplication, which means he has the ability to clone himself with no limit. While it is like actually splitting in half in the original series, in Omniverse, this ability is shown to be very similar to Echo Echo’s self duplication ability, but Echo Echo’s self duplication ability allows Ditto to split and remerge at a very fast pace. It turns out that each of Ditto’s clones is able to operate independently, regardless of what the others want them to do. Each one of Ditto’s clones is indistinguishable from the real one. With this kind of ability it helps Ben out with multiple tasks simultaneously or to help cover one large area. One very interesting thing about this kind tactic that I saw in Omniverse is that Ben used Ditto to extend himself to reach a vast distance. The way Ben does this as Ditto is simply by cloning himself in a straight line, which thereby forms a very long chain of Dittos. The duplication ability also helps Ditto compensate by overwhelming his opponent with sheer force of numbers. Ditto’s second ability is the raised green bumps that are on his body. These bumps on his body are called sensor nodes. As you can see these sensor nodes help give Ditto the ability to create a sensory web around the clones. This means that this sensory web allows them to share the same senses and physical sensations like feeling the same pain if him or one of the clones gets hurt for example. Ditto third and forth abilities show that he’s much more flexible than any human and is really quite agile. His fifth ability also shows that he’s good at burrowing into the ground and poping out like a mole as seen in the episode A Fistful of Brains. Ditto sixth ability shows that he can even breathe underwater like Ripjaws. Plus Ditto final ability shows that he can jump surprisingly high for his size as shown in the Ben 10 episode Divided We Stand. If you want to know why well it’s because while he was playing basketball, he was able to slam dunk the ball on a hoop and as you can see that would be very difficult for a average human to jump high enough to do that but not for Ditto. See images below: 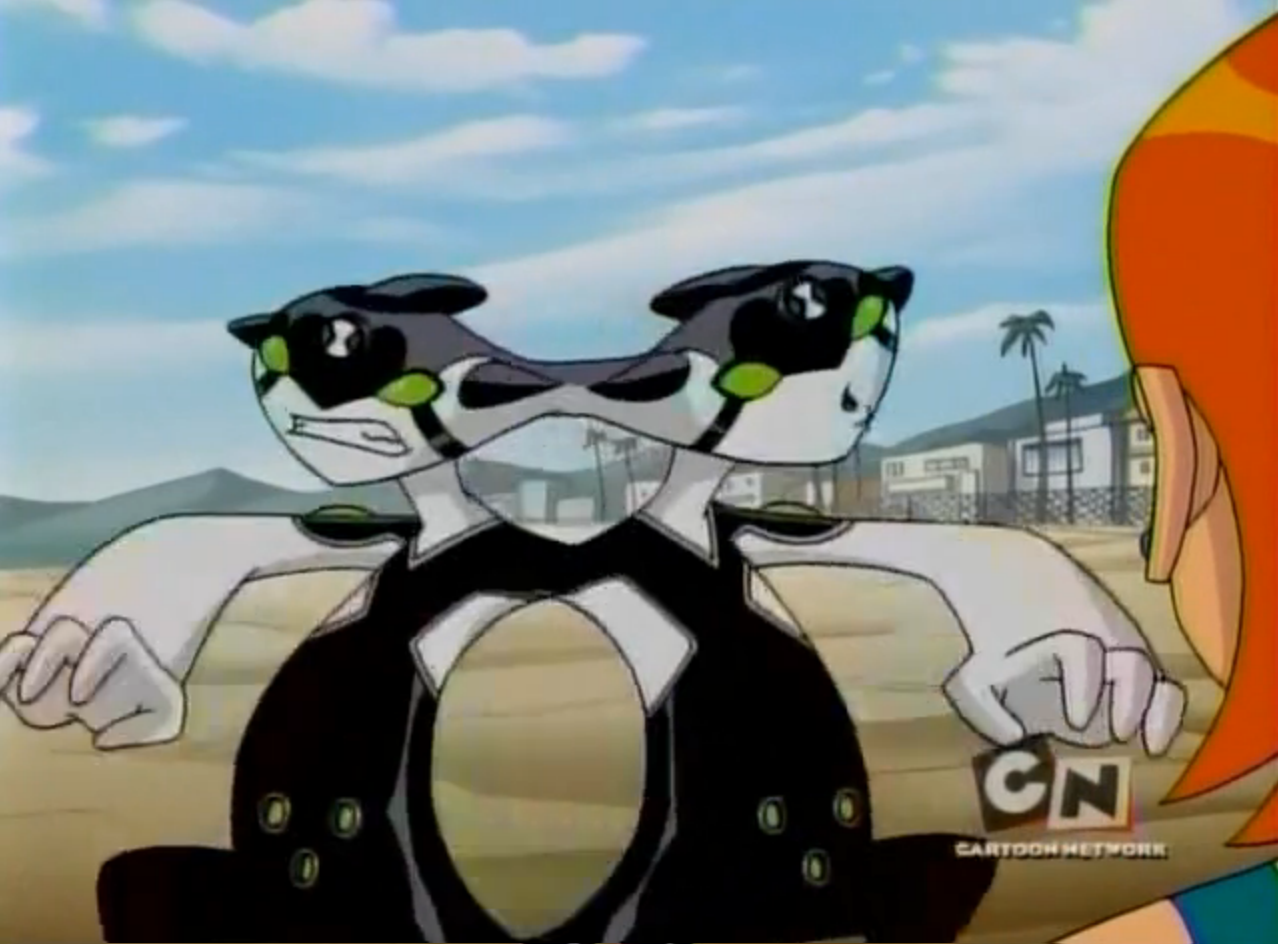 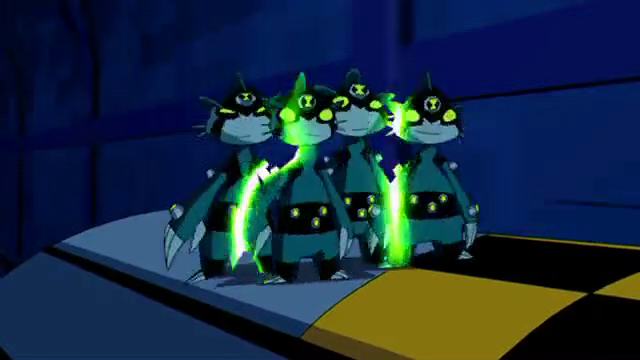 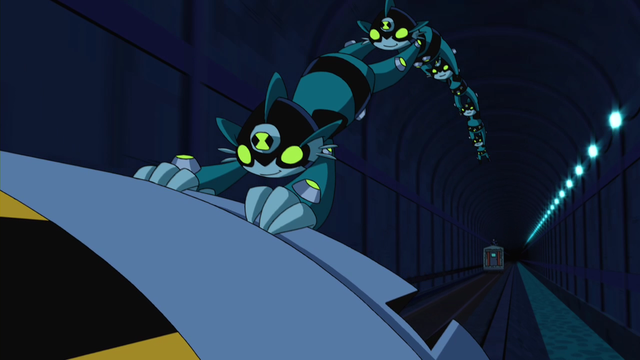 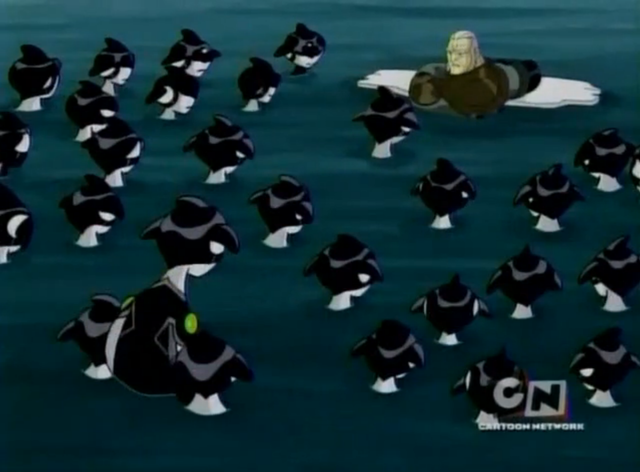 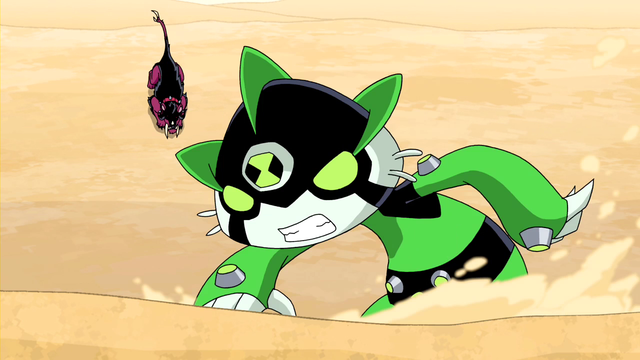 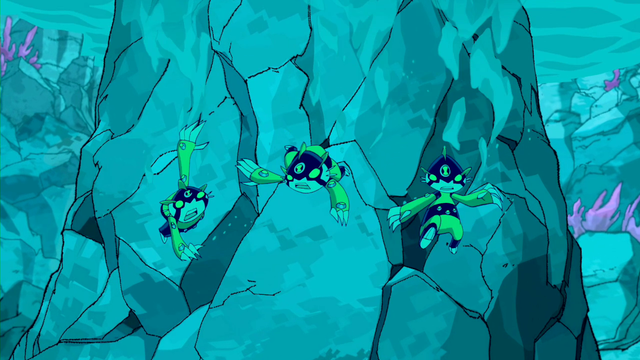 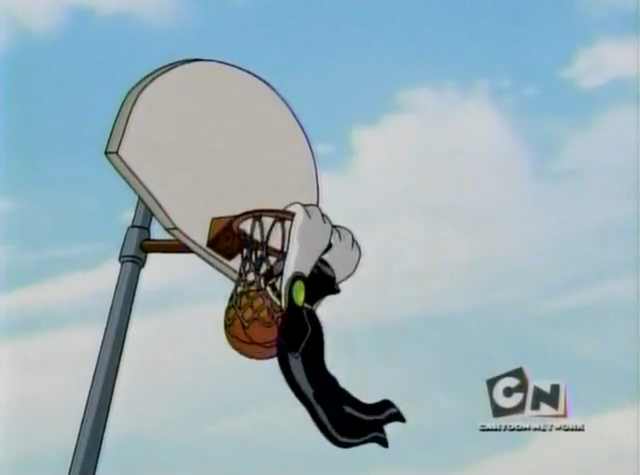 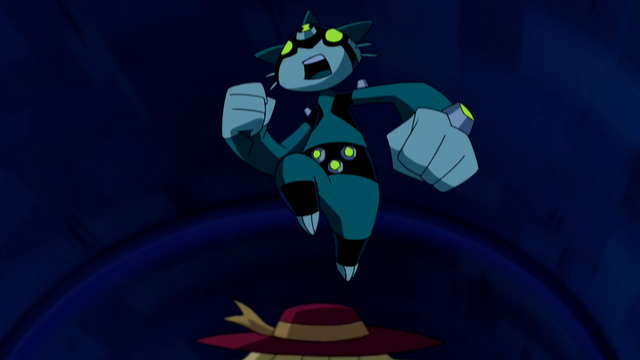 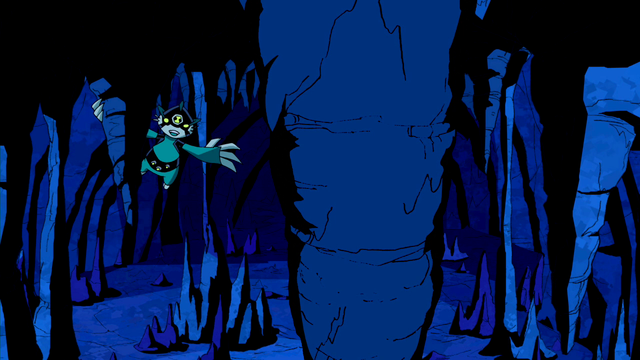 Weaknesses: One of the weaknesses that Ditto has is his clones because of the way they share a link with each other. The way the clones hare a link means that if one Ditto gets hurt like stubbing his toe for example, then that means that all the others feel the very same pain as he does and if the original Ditto is hurt or killed, then his duplicates are automatically hurt or killed as well. His second weakness that he has is due to the fact that each of his clones have some strength, running at the normal speed of a person, and the reach of a small human child then this puts Ditto at an disadvantage in the field of battle when he goes up to fight against a foe that is shown to be bigger and stronger then him. In the episode Divided We Stand, Ditto’s third weakness is that if he’s far apart from his clones then he can’t transform back into Ben unless he and his clones are together; it seems that his Omnitrix uses up more power than normal, as seen when he could only transform into Upgrade for a fraction of his normal time. Ditto’s fourth weakness is that even though it’s shown that he likes overwhelming his opponents with a sheer force in numbers he needs to make sure that all of his clones agree on only one plan, because if they don’t agree on it then this might result into a big argument between them. Ditto’s final weakness is his natural predator the Panuncian because in the episode A Fistful of Brains, he and his clones tried escape from it but failed in the end because this kind of predator always has got the edge on him. See images below: 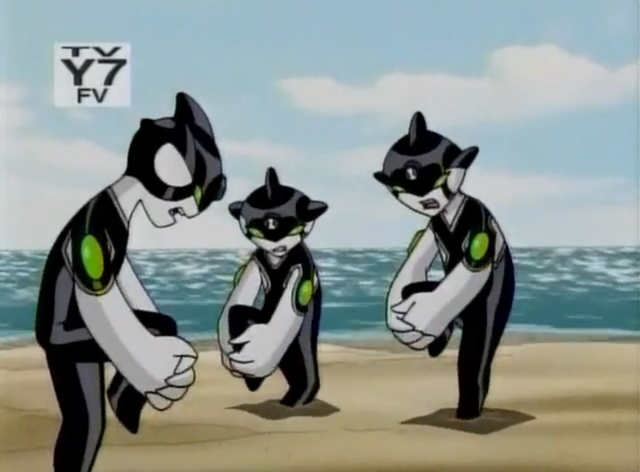 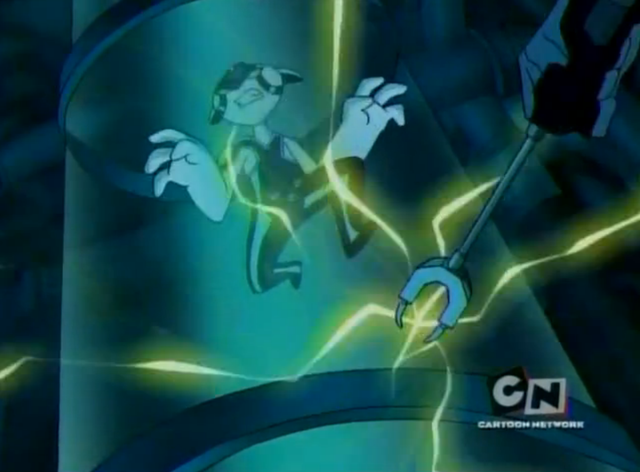 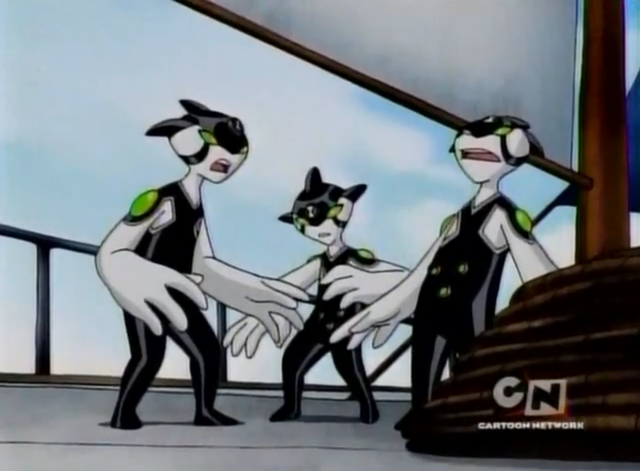 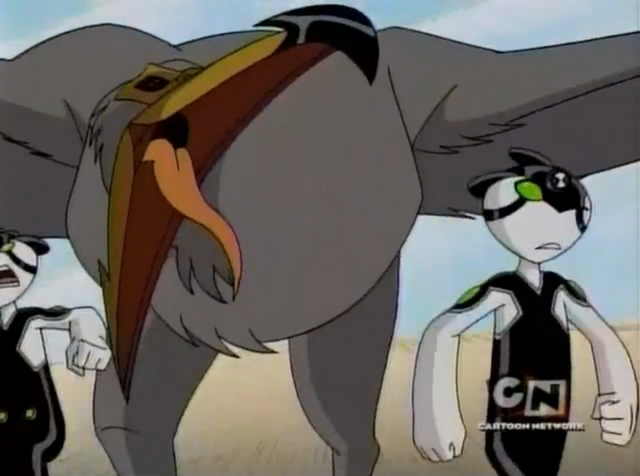 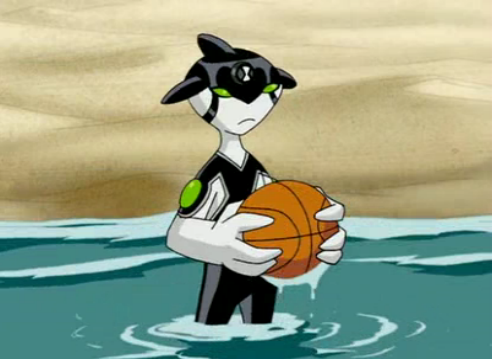 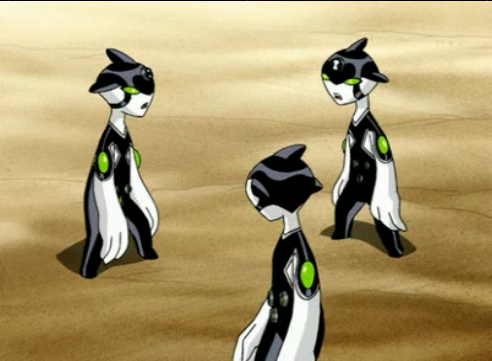 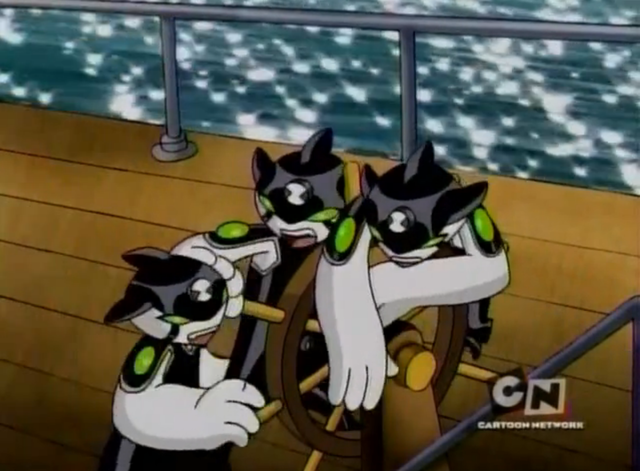 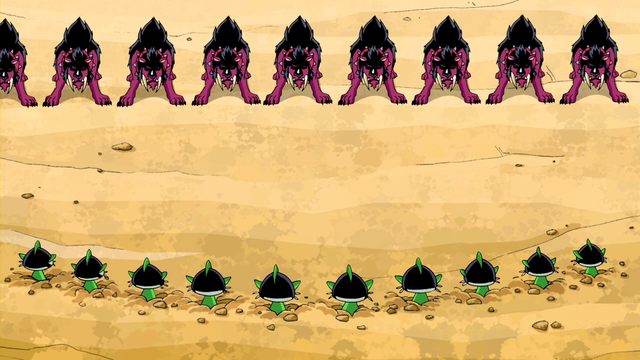 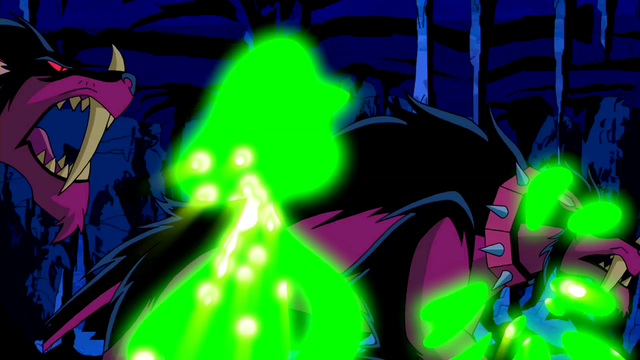 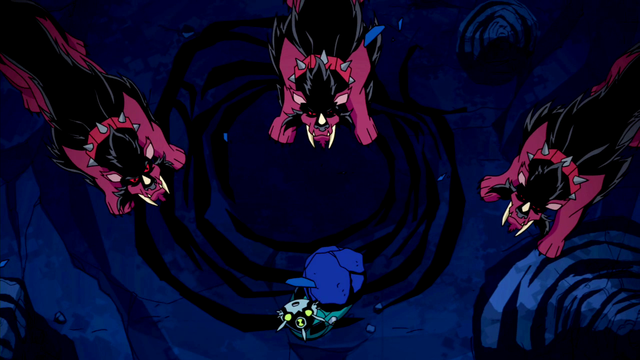 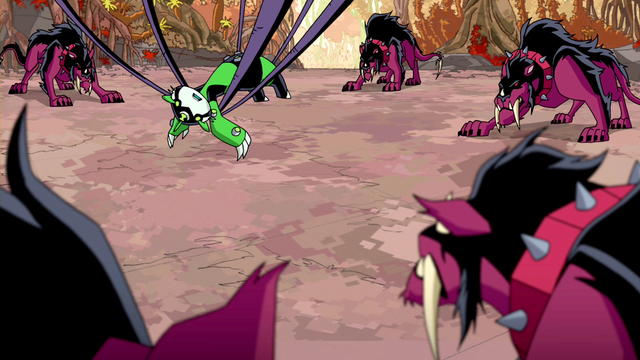