When it comes to catching crooks that can try to make a getaway on a speedboat or just swimming for freedom, Ben knows just the alien he needs that can swim in the water very easily like a fish to catch them. This fish alien that Ben uses is called Ripjaws!

Species and Home planet: Ripjaws’s species is a Piscciss Volann and the home planet of where he comes from is called Piscciss. It’s a planet that’s completely covered with water, which means that if you were there at the planet and looking a little closer you can be able to see the core of the Planet. See image of the planet below: 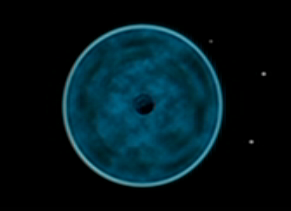 Original Series Description: Ripjaws can be described as a walking grey colored fish-like alien that is shown to share some traits with some of the aquatic animals we have on earth. These traits that he shares with are alligators, eels, angler fish (the Phosphorescent light located on his head), and sharks. You might even be astonished to know that Ripjaws has feet that look very similar to Four Arm’s feet. His eyes are a kind of grayish color. When he talks he speaks in a deep gasping voice. The Omnitrix symbol is located on his upper left torso. See image below:

Ultimate Alien Description: When he appeared in Ben 10 Ultimate Alien into, his tail was a black color, his lips where black, and his antenna was grey. When he appeared in the episode Perplexahedron, Ripjaws had a catfish-like face and new chest plates. His tail had triangular lines, his body is a grey color, the new chest plates are colored white, his antenna is green, his light on the antenna is yellow, and his lips are green. The Ultimatrix symbol is located on his chest. See images below: 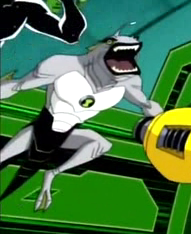 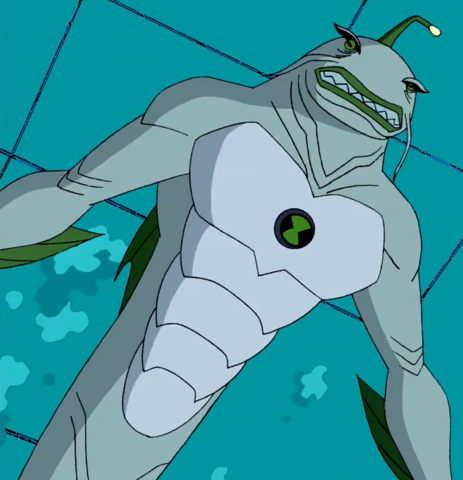 Omniverse Description: When he appeared in the Ben 10 Omniverse theme song Ripjaws had the appearance of the old Ripjaws from the Original series except that he now has a green strap on his waist, his eyes are green instead of the grayish color, and the Omnitrix symbol was recolored. The Omnitrix symbol is located on his upper left torso (as I had mentioned before). When used by 16 year old Ben, Ripjaws did still have his original appearance from the Original Series, except that his eyes are green instead of the grayish color (or the catfish eye-like look for that matter), he has arm and neck braces, his antenna light is green instead of yellow, he even has a big fin on his back, and his tail is now bigger than usual. When he speaks his voice doesn’t sound like the deep gasping voice, instead he talks in a higher, garbled voice, slightly similar to how a person would sound when underwater. The New Omnitrix symbol is located on a green and white striped belt around his waist. See images below: 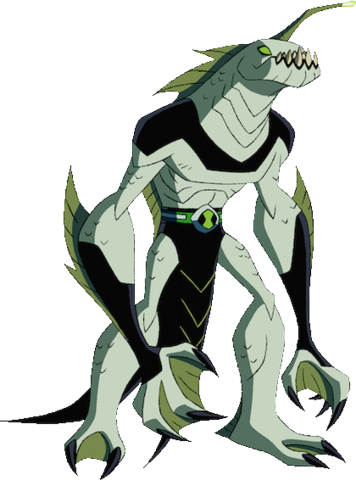 Special Abilities: Ripjaws first ability that he has is breathing underwater (just like any fish), swimming very fast at high speeds, changing between a fish tail or legs at will, and using a phosphorescent light on his head which he can use to help him see in very dark areas (like an angler fish does). Since you know that Ripjaws can turn his legs into a tail, this display of distinctive feature gives him a merman-like appearance. When Ripjaws is outside his water environment when on land, he’s shown to display a loincloth with a very similar pattern to his tail (implying that when the loincloth wraps around his legs the loincloth and legs fuse to become the tail). Even though Ripjaws can breathe underwater like any kind of fish, as well as swimming very fast, his fifth ability shows that he’s known to withstand very strong water pressure with great endurance. This implies that Ripjaws possesses the nature of abyssal aquatic life, hence his blank eyes and the anglerfish light in his forehead, which can serve as a light in dark areas. His sixth and seventh abilities show that he’s even highly agile and dexterous. His eighth ability is his expendable steel-bending jaws which are large enough to hold any supply of objects like the Krakken’s two eggs for example as seen in the episodes The Krakken and Gone Fishin’. His ninth and tenth abilities are his claws and sharp teeth, which can be used to shred and even, damage metal. Ripjaws final ability is his enhanced strength, with means that like Four Arms, he can lift any objects that weigh more than his own weight. He did also used his enhanced to punch a hole in a dock in the episode Last Laugh. See images below: 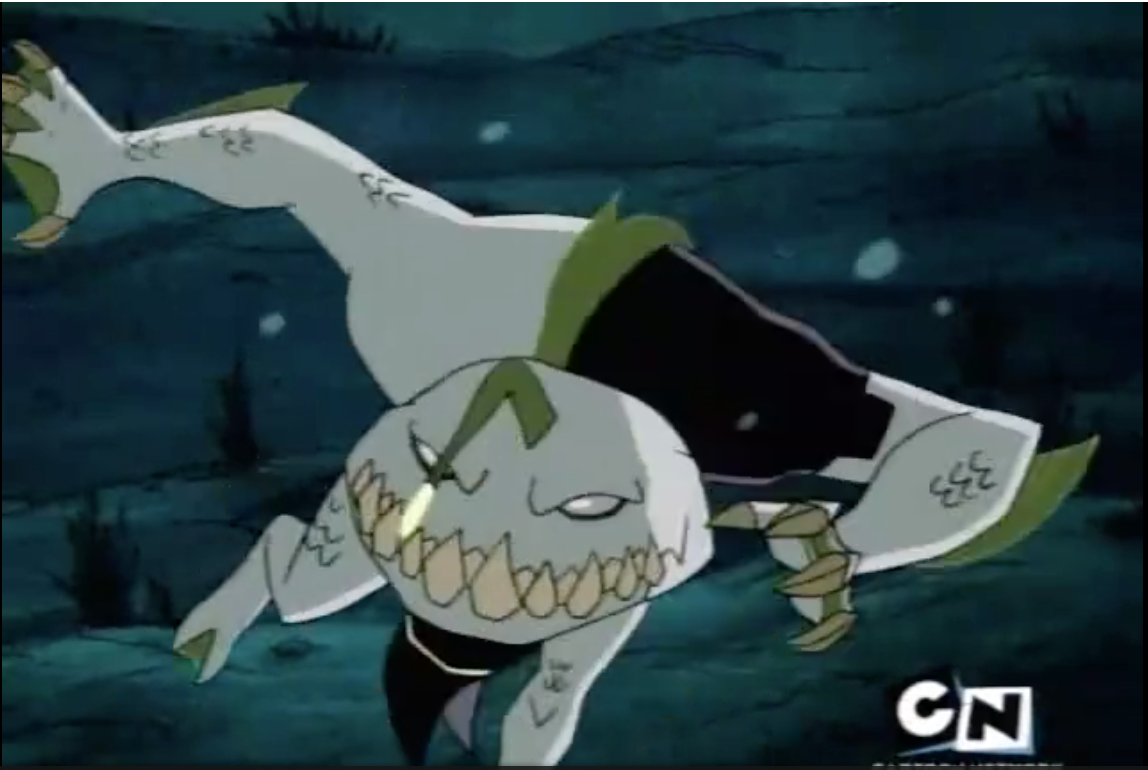 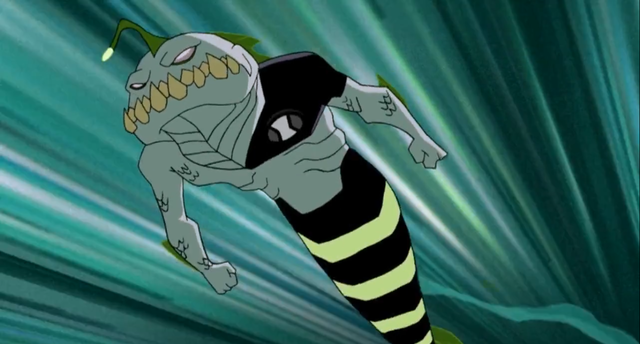 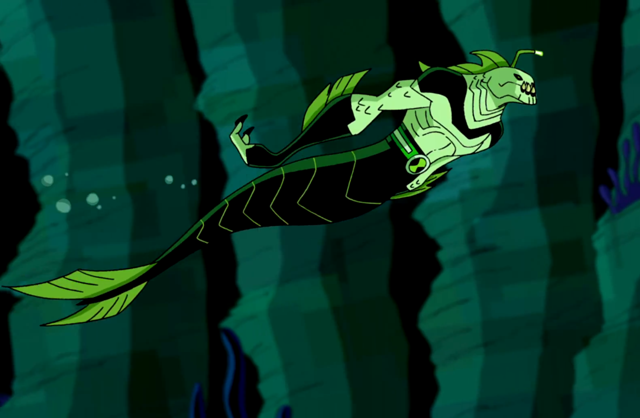 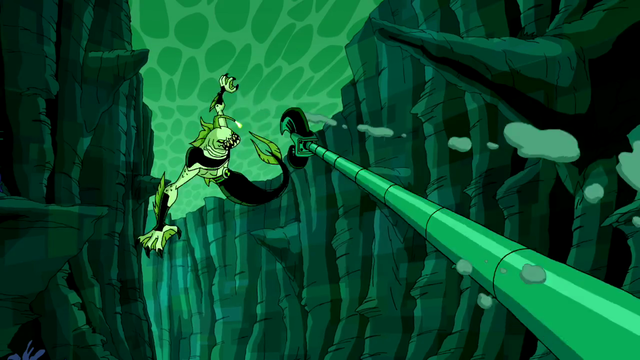 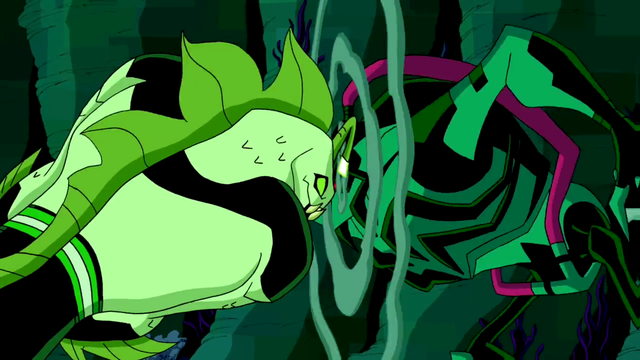 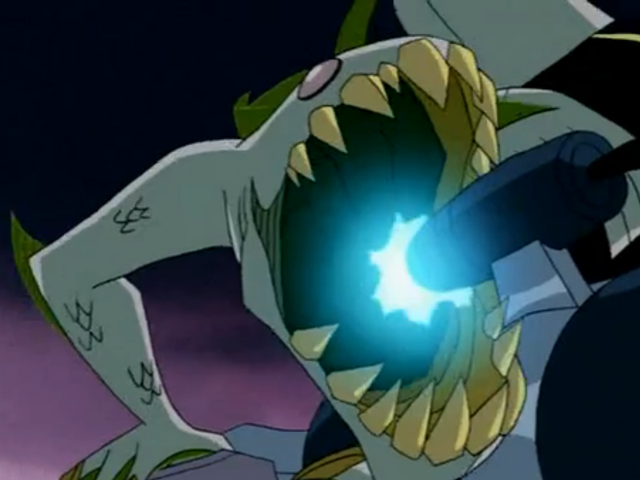 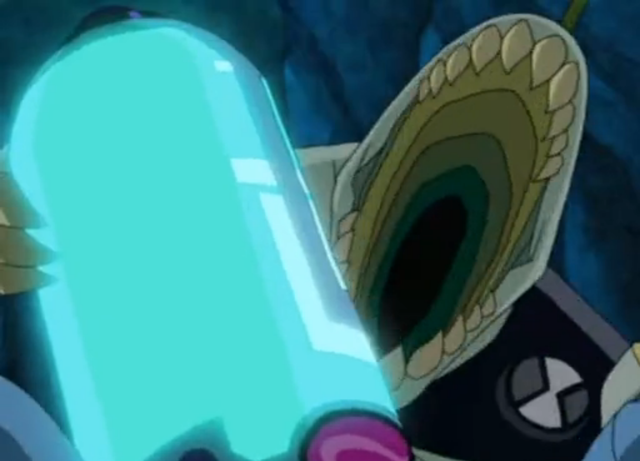 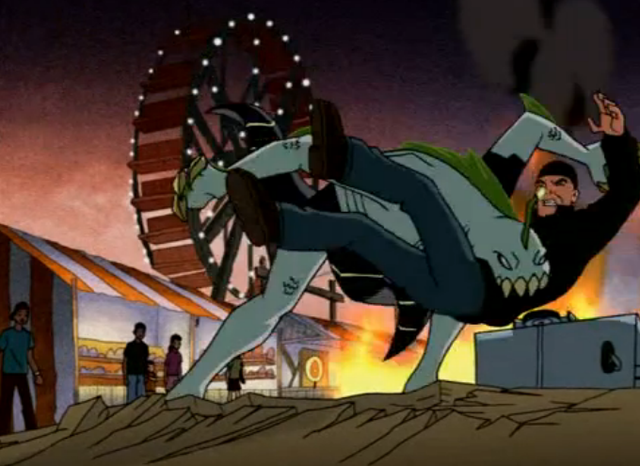 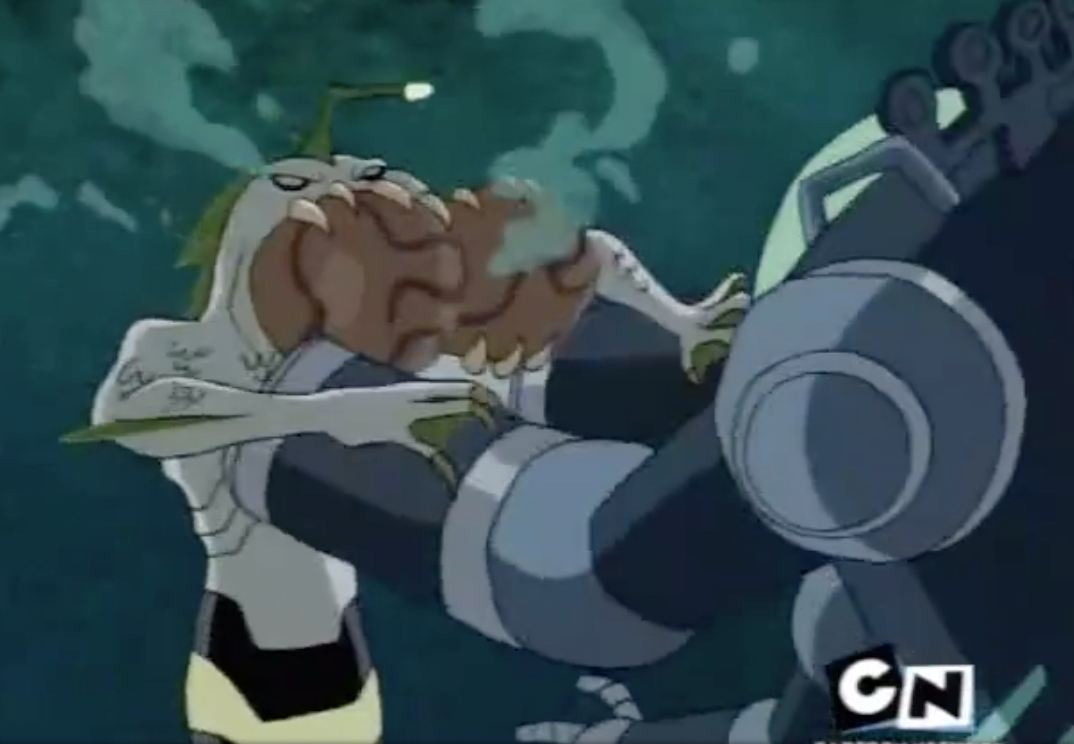 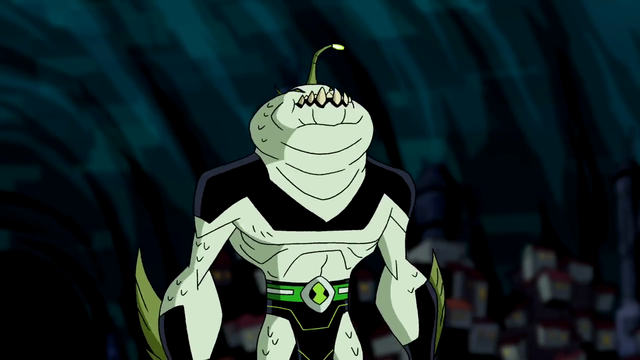 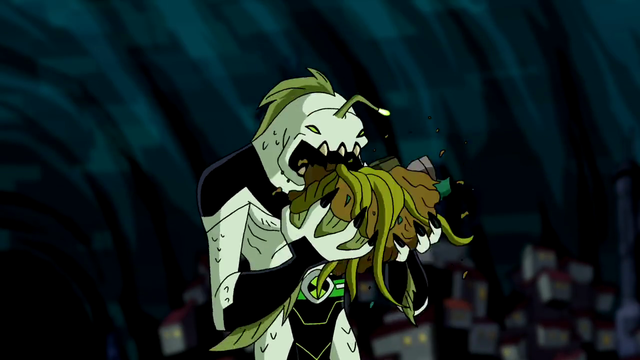 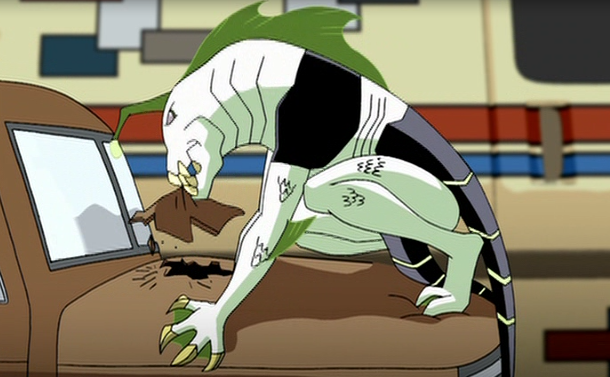 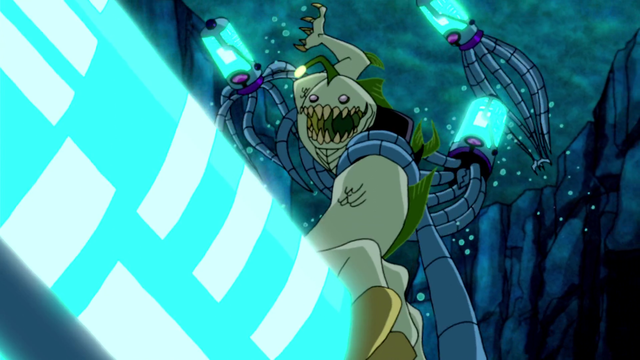 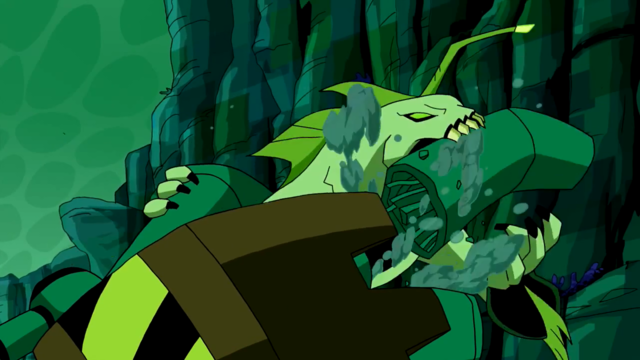 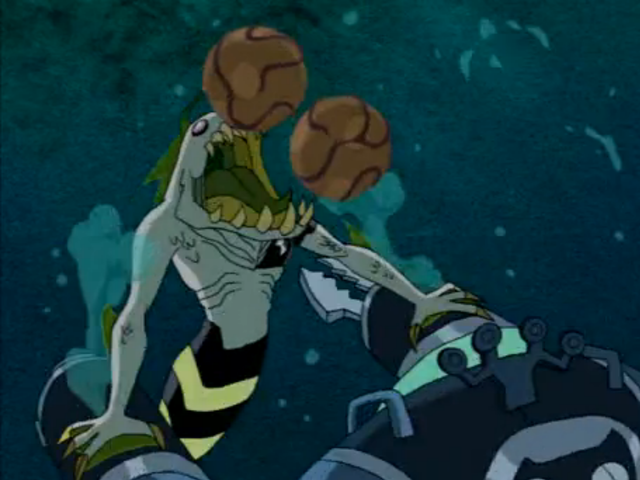 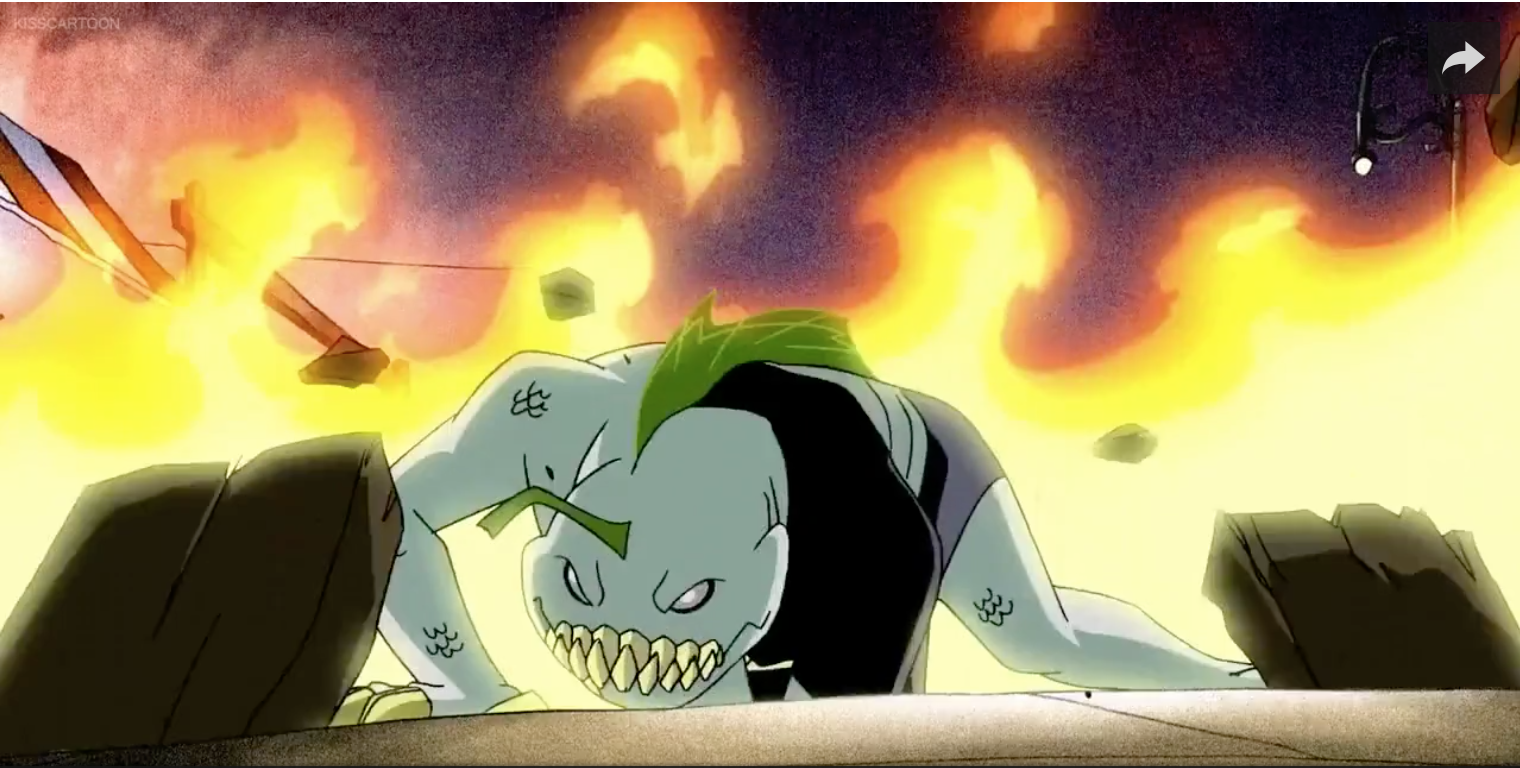 Weaknesses: Ripjaws’s first weakness is that since he is a fish staying out of water for too long will dehydrated and once he is dehydrated he can’t breathe without any water. However, even though Ripjaws needs water to breath, in Omniverse it showed that his need for water was pretty much less because when Piscciss Volanns (which are his species like I said before) get older they start needing water less and less. But it does show that Ripjaw’s second weakness is if he was left in a dry place for three days or so then he becomes severely dehydrated. His second weakness shows that he can get caught in fishing nets even though he has sharp claws that can help get him out of it. See image below: 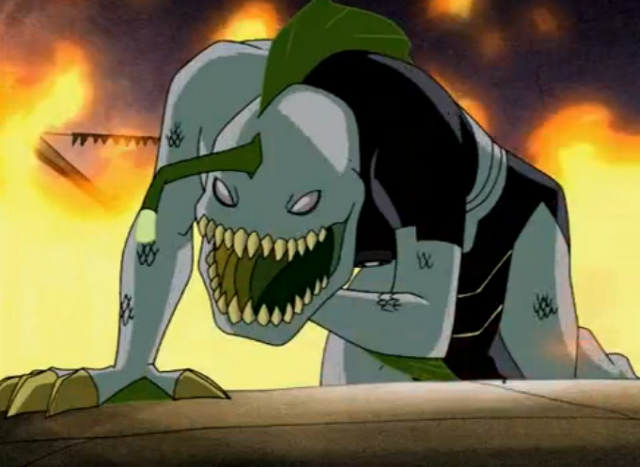 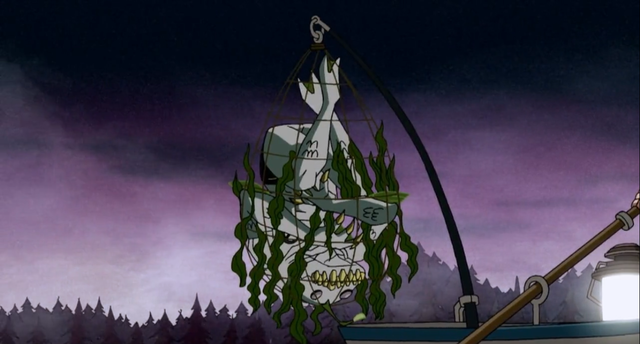